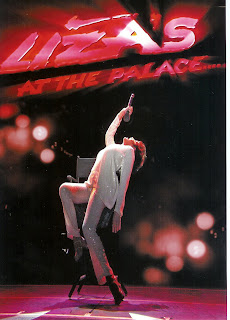 Liza Minnelli’s 2009 engagement at New York’s fabled Palace Theatre, coming after a European tryout, was justly acclaimed as one of the all-time great showbiz comebacks.

A mere year earlier – in a summer concert at Brooklyn’s Asser Levy Seaside Park – she barely had the energy to stand throughout her performance, and here she was on Broadway carrying off a two-hour plus evening of almost two dozen songs and commanding the stage with something not far removed from her trademark dynamism.

Critics outdid themselves for superlatives and she justly won Tony and Drama Desk awards for her performance.

That act has been faithfully and beautifully directed for video by Matthew Diamond, and produced in typical classy fashion by JoAnn Young, veteran of some of PBS’s finest musical moments (with Jim Arntz and Sven Nebelung) . Though the venue was the MGM Grand in Las Vegas, you’d scarcely know the difference. The songs, patter and electricity are precisely the same. Musical values are high, courtesy of her music director, singer-pianist Billy Stritch.

The video was presented last December on public television stations in a greatly abridged version, but this DVD release gives you the full show.

Minnelli’s performance is, if anything, enhanced by all the loving close-ups, and though the face is slightly fuller now, she looks terrific. The camera’s proximity underscores the subtlety of her acting throughout, especially several character songs like her extraordinary reading of Charles Aznavour’s “What Makes a Man a Man?”

The evening was anchored by two nostalgic centerpieces: a tribute to her mother Judy Garland, and another to her godmother, vocalist and MGM arranger and coach Kay Thompson, the latter the raison d’etre for the show.

Goosebump moment number one had Minnelli recreating her mom’s salute to the great entertainers who performed before her at the Palace: Nora Bayes, Sophie Tucker, Fanny Brice, and Eva Tanguay. Later, she movingly sang her mother’s “Have Yourself a Merry Little Christmas” as an encore. Both these moments are treasurable, as Minnelli has been fairly rigorous about not touching her mother’s material.

The second act was anchored by her tribute to Thompson. Backed by four talented singers – Jim Caruso, Johnny Rodgers, Cortes Alexander, and Tiger Martina -- she recreates Thompson’s groundbreaking club act from the 1940s, with the choreography recreated by Ron Lewis mainly from stills as there is no extant footage.

Minnelli has been fortunate that so many of her stage performances have been preserved on film. From the Emmy-winning “Liza with a Z” to the specials she made for HBO to her DVD concert with mentor Aznavour, the quality has been extraordinarily high over the decades.

On purely vocal terms, this latest can’t quite be said to be on a par with those earlier shows. After her serious bout with viral encephalitis in 2000, the voice now does not always do what she wants it to do, and her “s’s” occasionally come out distractingly with an “sh” sound. (The tongue-twisting “If You Hadn’t, But You Did” is particularly problematic in that regard, even with the DVD’s crystalline digital sound.)

But her professionalism and artistry remain undiminished, and have, if anything, increased with time. She knows how to interpret a lyric for maximum effect, and incredibly, she can still belt “Cabaret” and “New York, New York” with much of her former power. And the autobiographical patter between numbers has been carefully crafted and is unfailingly interesting.

The DVD comes with a two-page essay by her close friend, singer Michael Feinstein, and the disc has an especially treasurable bonus in a lengthy, intimate conversation between Lewis and Minnelli about the genesis of the show, which provides insight into Minnelli’s keen intelligence and determination.

They don’t make them like that anymore, and this video captures a great entertainer at her mature peak.