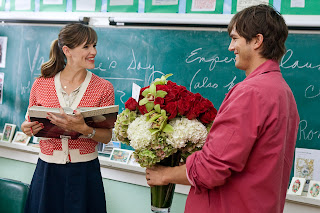 Last year’s Valentine’s Day ensemble cast charmer, “He’s Just Not That into You” was something of a surprise hit.

The present film is very much cut from the same cloth, but though the list of stars is even lengthier here, and the multi-strand plot of folks both in and out of love tries hard to be funny and ultimately touching, it falls rather short of the other film; and this despite the input of “He’s Just Not That into You” scriptwriters Abby Kohn and Marc Silverstein.

Still, I can’t say there isn’t some fun in watching the cast go through its paces. First, there’s Ashston Kutcher who, in the first scene, proposes to his career-centered bedmate Jessica Alba. His best friend (strictly platonic) is played by Jennifer Garner who’s having an affair with doctor Patrick Dempsey.

Kutcher is a florist – working with sidekick George Lopez – so his character becomes, more or less, the linchpin of all the others.

Jamie Foxx is a sportscaster assigned by producer Kathy Bates, much against his will, to come up with a soft Valentine’s Day story, when he really hopes to cover football star Eric Danes’ impending press conference. The latter’s team has lost in the playoffs, and speculation is rife that the quarterback will retire.

Latifah’s assistant Anne Hathaway moonlights as a phone sex worker, unbeknownst to newish boyfriend Topher Grace, a sweet guy from Muncie, Ind. Hathaway’s antics here are thuddingly unfunny, and the premise distasteful despite the script painting her character as a hard-working gal who simply needs the money.

On the more youthful end of the scale, high schoolers Emma Roberts (Robinson’s babysitter) and Carter Jenkins are foiled in their plan to lose their virginity during lunch hour. And, in the least satisfying plot strand, cheerleader Taylor Swift (the singer, in a less-than-auspicious acting debut) and track star Taylor Lautner are interviewed by a local TV station about the joys of young love.

Furthest down in age range is 10-year-old Bryce Robinson who, throughout the film, harbors a secret Valentine’s Day crush. The long-term marriage of his grandparents Shirley MacLaine and Hector Elizondo is jeopardized when the former fesses up to a long-ago affair. (Their subsequent make-up takes place at an outdoor screening of MacLaine’s actual 1958 film, “Hot Spell,” as her character here is supposed to be a former actress.)

And lastly, Bradley Cooper chats up Army Captain Julia Roberts on a lengthy flight. (Cooper, some may recall, was Roberts’ co-star in their joint Broadway debut, “Three Days of Rain.”) Roberts is en route to an important rendezvous, and Cooper wonders at the identity of the person she’s going to meet.

Kutcher has the most screen time, and he’s a likable presence, while most of the others do the best they can with the material at hand.

Garry Marshall directs these couplings proficiently enough, and Katherine Fugate’s script is not without its occasional charms, but this is pleasant entertainment at best, better on sentiment than laughs.

Everything’s tied up neatly at the end. Not all of the developments are predictable, but the characters you care most about do indeed get their final clinch. As a Valentine’s Day date movie, this passes muster, but only just.

(Rated PG-13 by the MPAA for some sexual material and brief partial nudity) Print this post
Posted by Harry Forbes at 9:10 AM