From Paris with Love (Lionsgate/EuropaCorp) 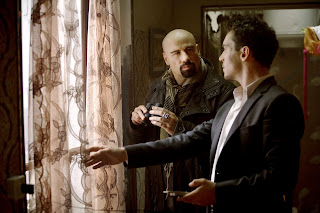 This is a fast moving, not unexciting, but exceedingly violent thriller about CIA operatives attempting to foil a terrorist plot in the City of Light.

James Reese (Jonathan Rhys Meyers), an aide to the U.S. ambassador to France (Richard Durden) has been moonlighting as a junior CIA operative, but hopes for bigger things. He gets more than he bargained for when he’s finally assigned to work with a maverick agent Charlie Wax (John Travolta) against assorted baddies.

Directed by Pierre Morel, who helmed the box office smash “Taken,” this is another adrenaline-pounding thriller, though this time, though much less effective than the more viscerally appealing father-seeking-kidnapped-daughter storyline of its predecessor.

The first half of the movie has Reese and Wax facing off against Asian drug dealers (there’s a big shoot-em-up in a Chinese restaurant, for starters), the second against terrorists intent on bombing a top-level international conference, overseen by Reese’s ambassador boss. Apparently, the drug money finances the terrorist.

Kasnia Smutniak plays Reese’s pretty girlfriend who turns out to play a more important part than mere window dressing. Their engagement dinner is disrupted when Reese gets the fateful call to meet the just-arrived Wax at the airport where the wildly unconventional agent has already caused a fuss at customs.

To say that Wax is a trigger-happy lunatic is an understatement. But Travolta – bald, foul-mouthed, sporting a goatee and an earring -- does have fun with the sort of role that might be more of a natural for Bruce Willis.

The Irish Meyers – with an impressively authentic American accent -- and Travolta have a surprisingly enjoyable rapport, something akin to that of Woody Harrelson and Jesse Eisenberg in “Zombieland,” the outrageous older mentor and the less experienced, gun-shy sidekick.

But this script (by Adi Hasak, from a story by producer Luc Besson) isn’t nearly as witty as that one. There’s a mildly amusing visual gag involving Reese having to carry around a huge vase of cocaine, in the midst of all the shooting. But more wacky banter between the two leads in what is essentially a classic buddy setup, and less mindless mayhem – which here becomes awfully tiresome -- would have been welcome.

(Rated R by the MPAA for strong bloody violence throughout, pervasive language and brief sexuality.) Print this post
Posted by Harry Forbes at 9:11 AM