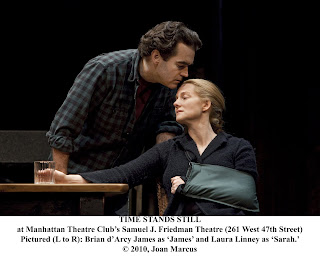 Donald Margulies’ latest work, “Time Stands Still,” is sharply and wittily written, exploring not only the domestic relationships of its two central couples, but also the myriad gradations of involvement and detachment in a troubled world.

Sarah (Laura Linney) is a newsmagazine photojournalist just returned to the States after being crippled and scarred in a roadside bomb in Iraq. She’s being cared for by her longtime companion, reporter James (Brian d’Arcy James) who had returned to their Brooklyn home a few weeks before Sarah’s injury after he suffered a mental breakdown there.

He now hopes they can marry and live a more conventional life away from roadside bombs and other dangers. He’s decided he’ll be happier writing an article about the cathartic effects of horror films.

Despite their nine years together, and James’ tender care of Sarah in aftermath of Sarah’s injury, there’s a chink in their relationship. It seems Sarah had a romantic involvement with her local “fixer” (i.e. translator) who was killed in the explosion. Still, James is content to forget the affair, and carry on.

Sarah’s editor and former flame Richard (Eric Bogosian) shows up with his half-his-age girlfriend Mandy (Alicia Silverstone), an event planner. The naïve young woman is appalled at the misery in the world and Sarah’s seeming detachment to the horrors she captures through her lens. These are moments, Sarah explains, when “time stands still.” Mandy likens her to a documentarian that allows cruel nature to run its course in the wild, doing nothing to interfere.

Richard and Mandy are becoming exemplars of the domestic tranquility that has become increasingly appealing to James.

Smoothly directed by Daniel Sullivan for Manhattan Theatre Club, the four stars couldn’t be better in delineating their interesting and varied characters.

Laura Linney’s Sarah, toughened by her experience, and leery of family life, in view of her fractious relationship with her (never seen) father; James, his character strong and loving, even as he seeks retreat by immersing himself in horror flicks on his new flat screen TV; Silverstone, most appealing as the lightweight addition to the close-knit group and showing more mettle than first assumed; and Bogosian, a straight-shooter, supportive of his friends, and at mid-life, genially getting in step with his new relationship.

In lively, naturalistic dialogue, Margulies explores his themes in several thought-provoking confrontations. Can knowing about the horrors of the world – either through photos, articles, or theatrical re-enactments -- really effect change? What is the role of journalists in the world's hotspots? Are they merely building their careers on other people’s misery?

Margulies doesn’t provide pat answers, but he gives us plenty to chew on and this blue-chip cast is a pleasure to watch.

John Lee Beatty’s loft setting looks like the real McCoy, as expertly lit by Peter Kaczorowski, and Rita Ryack’s costumes are as impeccable as all the other elements of this fine production.