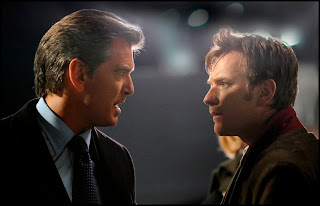 It’s been five years since Roman Polanski’s last film (“Oliver Twist”), but the director has lost not a jot of his talent for creating a deliciously ominous sense of foreboding, as this absorbing political thriller demonstrates. If the story – adapted by Polanski and Robert Harris from the latter’s novel, "The Ghost" -- doesn’t quite provide the slam-bam payoff one would expect at the end of its two-plus hours, this still ranks as a superior thriller.

Ewan McGregor plays the titular unnamed writer who agrees to polish up the autobiography of former British prime minister Adam Lang (convincingly played by Pierce Brosnan) after his predecessor, a long time colleague of Lang, drowns during a ferry crossing between the mainland and a Martha’s Vineyard-like island off the eastern seaboard. (The film was actually shot mostly in Germany.)

The mercurial Lang, it soon develops, may have had a hand at turning over suspected Pakistani Al Qaeda terrorists to the CIA for torture, and Lang’s former Foreign Affairs Secretary (Robert Pugh) is helping build a case against him as a war criminal. Suddenly, these allegations are all over the media.

The writer has a mere month to finish his task, but he stays at a nearby hotel to maintain his objectivity. When, however, a glowering stranger (David Rintoul) in the hotel bar aggressively inquires about Lang’s whereabouts, and the writer returns to his room to find it in disarray, Lang’s personal assistant (and, it would appear, mistress), Amelia (Kim Cattrall, quite different than her Samantha role on “Sex & the City”) informs the writer he’d better remain on the premises of Lang’s secluded house.

Once ensconced, he gets to know Lang’s wife Ruth (Olivia Williams), a politically savvy lady with (surprise) a resemblance to Cherie Blair, who shares her confidences with him, and eventually finagles her way into his bed.

As more questions are raised about Lang, his background, his true political convictions and so on, the writer finds his curiosity mounting despite his earlier assertion that, after all, he’s not an investigative reporter.

The always reliable McGregor holds everything together, much as he did “The Men Who Stare at Goats,” playing a sort of everyman pulled into extraordinary events. He’s on screen almost every minute – a sympathetic, likable presence -- and we watch what happens through his eyes.

Williams is top notch as the tart wife. Smaller roles are well taken by Tom Wilkinson as Lang’s Cambridge crony who clearly knows more than he’s letting on. The scene between him and McGregor is one of the tensest in the film, along with the cat-and-mouse car sequence that follows.

Other roles are smartly taken by Timothy Hutton as Lang’s DC lawyer, John Bernthal as the writer’s agent, and 93-year-old Eli Wallach as an “old man” who sheds some expository light on the death of the ghost’s predecessor. (You won’t be surprised to learn it was neither an accident nor suicide.)

As is typical of the genre, the McGregor character does sometimes venture into some dangerous predicaments that have you wondering why he’d take the risk, so some suspension of disbelief is required.

But Polanski’s assured style helps in that regard. The aforementioned car sequence, and late in the film, the passing of a crucial note through a crowd are but two of many brilliantly executed sequences, and he maintains a pervasive sense of gloom and isolation at the Lang compound. The weather is unremittingly bleak or stormy.

Plot holes, character motivation, political subtext and Polanski’s current legal entanglements aside, this is an enjoyably old-fashioned suspense film in the Alfred Hitchcock manner, and a late-career high point for the filmmaker.

(Rated PG-13 by the MPAA for language, brief nudity/sexuality, some violence and a drug reference.) Print this post
Posted by Harry Forbes at 10:19 AM