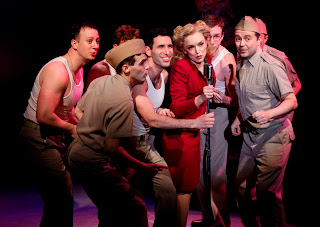 I didn’t catch it at NYMF, but the terrific Gallery version – with three of the stars of the current production, Bobby Steggert, Nancy Anderson, and Jefrey Denman, and also directed by Igor Goldin – already signaled that this was a show ready for the big time, an impression confirmed by all the subsequent stagings.

Though it still clocks in at two and a half hours, the pacing is tighter, and the production elements slicker. But the elements that made it so appealing before have not been lost.

Brothers Joseph (music) and David (book and lyrics) Zellnick have written a wonderfully accessible score – old fashioned in the best sense – and the narrative is consistently compelling. The intimacy of the York playing space is a plus, but I’ll bet it would open up just fine if it were ever to transfer to a Broadway house.

Largely inspired by Allan Berube’s “Coming Out Under Fire,” the nonfiction history of gays in the military during World War II, David Zellnick’s book concerns a bashful soldier named Stu (Steggert) and his crush on the handsome Mitch (Ivan Hernandez) who takes the bullied Stu under wing, and falls for him, despite a fiancé back home.

Their relationship is strained when the embarrassed, sexually ambivalent Mitch pulls back after a tentative kiss, and Stu is soon after recruited by “Yank” magazine reporter Artie (Denman) to become a photographer for the magazine and, in the song “Click,” offers his new assistant a primer on the ways of gay life – the Y’s, the bars -- in the ranks.

Stu hooks up again with Mitch when he and Artie finagle a profile of Stu’s former company. Trouble ensues, however, when one of the soldiers (Andrew Durand) catches the couple in a clinch.

David Zellnick’s intelligent dialogue and Goldin’s naturalistic staging give a realism to the army scenes, and despite the book’s obvious sympathies, avoids the political and overt references to today’s “don’t-ask-don’t-tell controversy.

There are echoes of Sondheim here and there, but songs like “Remembering You,” “Betty” (a paean to Grable, Rita, Lana, and the rest), “A Couple of Regular Guys” genuinely evoke the WWII era. There’s not a clinker in the bunch, and music director John Baxindine’s five-piece orchestra provides deft accompaniment.

The delightful Nancy Anderson has an impressive showcase, playing a range of roles in Tricia Barsamian’s colorful period duds. In spot-on 1940s style, she sings the Zellnicks’ catchy pastiche numbers, the jivey “Saddest Gal What Am,” the soulful “Blue Twilight,” and the Jeanette MacDonald-inspired “The Bright Beyond,” among them. In all of these, as well as her turn as a butch army officer sympathetic to the guys, she delivers savvy characterizations.

If there was one plus about the premature closing of “Ragtime” it was freeing up Steggert to return to his pivotal role. Just as brilliant as he was in “Ragtime” playing the radicalized Younger Brother, he inhabits Stu with honesty and truth. As in previous incarnations of the show, he really owns this part, playing with an understated naturalism that is most engaging.

Steggert is also the show’s narrator, a present-day San Franciscan who finds Stu’s war journal in a junk shop, and morphs into the Stu character.

Hernandez has just the right looks and easy masculinity for the handsome Mitch whose unease with his sexuality seems in sharper focus than in the Gallery mounting.

Denman nails the smooth-talking Artie, and provides the lively choreography, including a dream ballet for Mitch and Stu, danced by Denis Lambert and Joseph Medeiros respectively. A couple of nifty, full-out tap numbers gives the show variety and lightens the tone at just the right moments.

The others in the company: Durand, Tally Sessions, David Perlman, and Christopher Ruth. Todd Faulkner, Zak Edwards, and Medeiros as swishy guys in the secretarial pool who call themselves Scarlett, Melanie, and India are all marvelously versatile, with some impressive doubling of roles.

The show got a rousing hand from York subscribers at a recent Saturday matinee, affirming that the show’s appeal is broader than its specialized subject matter might suggest.

“Yank!” is bound to have a life beyond its limited season here, but you'd do well to catch this beauty of a show now.