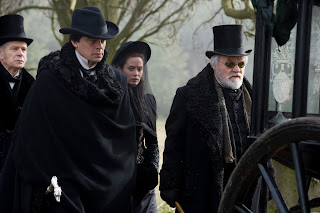 Faithful in spirit if not quite to the letter, director Joe Johnston’s version is that anomaly: an old-fashioned horror film, albeit with more gory bits (generally seen in quickly edited shots) than you’d have seen in Universal Studios’ glory days as the horror film studio.

Now picturesquely set in a murky 1891 Blackmoor (rather than 1940s Wales), beautiful Gwen Conliffe (Emily Blunt) has written to Lawrence Talbot (Benecio Del Toro) imploring him to aid the search when her fiancée (his brother) goes missing

Talbot is a Shakespearean actor (of all things!), as we see in a short, but tantalizing theatrical sequence where, perhaps mercifully, we don’t actually get to hear Del Toro recite the Bard.

He dutifully returns to the family home, run by his autocratic, derelict and sinister father Sir John (Anthony Hopkins), who rules his dilapidated roost with a mysterious Indian servant Singh (Art Malik) and a growling dog. Lawrence is scarcely in the door, however, when the brother’s mangled body is found.

Rumors spread about a fearsome wolf like creature that comes out when the moon is full. The old fortune teller (a heavily made-up Geraldine Chaplin in Maria Ouspenskaya’s old role) seems to know all about the curse of the werewolf. “Even a man who is pure of heart and says his prayers by night may become a wolf when the wolfsbane blooms and the autumn moon is bright…” the old legend goes.

Lawrence is determined to track down his brother’s killer, but one moonlit night, when the creature is unaccountably running amok in the gypsy camp, he himself gets bitten. Sure enough, it’s not long before he's transformed into a hairy beast, courtesy of ace special effects man creature effects designer Rick Baker.
.
But even before this metamorphosis, the frightened and vengeful townspeople, lead by Scotland Yard’s Inspector Aberline (Hugh Weaving) – based, incidentally, on the real inspector who investigated the Jack the Ripper murders -- seem inclined to suspect Lawrence, for no more cogent reasons than he’s the stranger, and if he can play parts like Hamlet, who’s to say he can’t assume more, uh, lupine roles.

Everyone seems to know Lawrence spent a year in a mental asylum as a child after seeing his mother brutally murdered (huh?), after which he was sent to America, presumably losing his English accent, thespian or not, in the process.

At one point, the gypsy woman tells Gwen that a wolfman can only be redeemed by someone who loves him, and you just know Gwen will put that into practice.

At one point, Lawrence ends up back in the asylum, leading to one of the more entertaining sequences in the story. Anthony Sher is the smarmy doctor Dr. Hoenneger who is convinced that his patient is sadly delusional, and he’s lecturing his colleagues in the medical theater, while Lawrence is tied up behind him, the latter begins to transform, much to the horror of the assembled.

I can’t tell much more of the plot without spoiling what little actual suspense there is, but suffice to say, fans of the original film will find several points of deviation from the story as they remember it, though Andrew Kevin Walker and David Self’s script retains many of the character names and basic arc of the original screenplay.

Thrills, such as they are, come mostly in sudden quick-cut jolts of violence, and though the film doesn’t exactly wallow in gore, there’s plenty of blood, severed heads, and the like. There do seem to be some continuity problems, perhaps the result of skittish last-minute editing.

The film has atmosphere, and Danny Elfman’s appropriately pounding score sets the tone.

Hopkins chews the scenery shamelessly, but it’s that kind of role. Matters of accent aside, Del Toro has the right tortured manner for the role. And even in these dubious surroundings, Blunt manages a respectable performance, not far removed from the one she gave in “The Young Victoria.”

And with classy supporting players like Weaving, Sher, Chaplin, and David Schofield as a constable, the production as a whole – dark but lush -- is more than decent, even if more suggestive of the Hammer horror films of the 1950s than the Universal prototypes to which it purports to pay homage.

(Rated R by the MPAA for bloody horror violence and gore.) Print this post
Posted by Harry Forbes at 6:22 AM