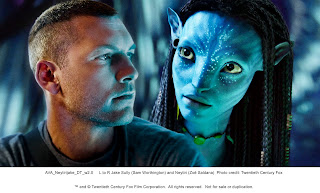 Writer-director James Cameron has really outdone himself with this one, and it’s a project that’s been percolating even before “Titanic.” He has said in interviews that he needed to wait for technology to catch up to his vision. Well, it has.

This is a lavish and tumultuous science fiction epic about a wheel-chair-bound marine, Jake Sully (Sam Worthington), who joins an expedition to the distant moon of Pandora in year 2154. It’s a biological mission for a corporate consortium hoping to mine a rare mineral that will solve the Earth’s energy crisis.

The titular avatars are man-made humanoids (that is, a hybrid of human and the natives of Pandora, the Na’vi, which are elongated blue-skinned figures with almond-shaped eyes). These avatars can safely traverse the alien landscape while their human alter-egos sleep in hermetically sealed containers at the home station, Hell’s Gate.

In his avatar mode, Jake’s handicap poses no problem, and he can walk, run, and fight with the best of them. In the course of the film, he befriends the Na’vi creatures, falls in love with their clan’s huntress daughter Neytiri (Zoe Saldana), and eventually sides with them against the establishment which cares nothing for their culture or their Eden-like environment.

Cameron has succeeded in marrying an intelligent – even if familiar – story with truly groundbreaking special effects, and that includes the ungimmicky use of 3D. At 162 minutes, the film is long – including a lengthy battle sequence near the end – but the pace never flags, and Cameron makes every shot count.

The Australian Worthington (with a good American accent) makes an empathetic hero, and indeed, all the performances are a cut above for this genre, including that of Cameron’s “Alien” star Sigourney Weaver as the mission’s top biologist Grace Augustine; Stephan Lang as hard-nosed Colonel Miles Quaritch; and Michelle Rodriguez as Trudy Chacon, a scrappy pilot on the Hell’s Gate base; Joel David Moore as easy-going Norm, another scientist on the team; and Giovanni Ribisi as Parker Selfridge, a cold-hearted administrator in league with Quaritch. Even though the avatars get the most screen time, the CG performance capture technique used here gives us, as never before, the subtle nuances of the actor playing the role.

This is a grand, fantastical adventure, but beyond the exciting action set-pieces like that climactic battle and Jake’s escape from several monstrous creatures, there are some breathtakingly beautiful sequences including several wondrous flights which Jake and Neytiri take on giant birds, and gorgeously detailed settings such as the floating mountains and the lush rain forest. (I’ll take this version of paradise over that currently on view in “The Lovely Bones.”)

Of course, we’ve seen this story of a Yank who decides to help an indigenous people retain their territory and their culture (e.g. “Dances with Wolves,” “The Last Samurai”) but this epic – a milestone in digital technology – presents it in a dazzling new light.

Beyond its dramatic virtues, Cameron’s script admirably carries a strong pro-ecology subtext and its portrayal of the military machine – in particular, Lang’s steely commander – registers as a scathing indictment of U.S. imperialism with several pointed references which will bring to mind the Bush administration and Iraq.

(Rated PG-13 by the MPAA for intense epic battle sequences and warfare, sensuality, language and some smoking.) Print this post
Posted by Harry Forbes at 8:07 AM