Up in the Air (Paramount Pictures) 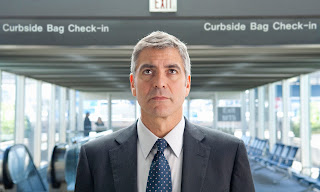 This funny and sad saga about a motivational speaker and professional downsizer is a worthy follow-up to director and co-writer Jason Reitman’s crowd-pleasing “Juno” and, quite simply, one of the best films of the year.

Ryan Bingham (George Clooney) travels the country firing employees at their companies’ behest. Happy to be free of personal commitments – his self-help speeches have to do with lightening our personal “backpacks” -- he considers as home the airports, planes, and hotels in which he spends most of the year.

When he meets Alex Goran (Vera Farmiga), an equally footloose and sexually playful fellow traveler, with whom he can have casual trysts without complications, and Natalie, a young efficiency expert who has introduced his boss (Jason Bateman) to the concept of firing long-distance by videoconferencing without travel, Ryan has an epiphany.

Clooney is at the top of his game, beautifully conveying a man waking up to the shallowness of his life, and realizing there’s more to achieve than frequent flyer miles. Farmiga projects empathetic warmth beyond the initial flirtatiousness, and Kendrick, who as a teenager was nominated for a Tony for her scene-stealing kid sister role in “High Society,” brings out all the contradictions of her still-maturing character.

The scenes of Ryan and Natalie carrying out their unpleasant duties – filmed with real people who have recently lost their jobs – are especially poignant and even painful to watch. There’s good work, too, from Melanie Lynskey as Julie, Ryan’s about-to-be-married sister, and Danny McBride as her fiancée Jim, who in light of Ryan’s carefree existence, gets a serious case of cold feet before the planned wedding.

Reitman has made a film for our times that is both moving and entertaining on many levels. Adapted from the novel by Walter Kim, Reitman is responsible for two key components: the characters of Alex and Natalie. The film – crisply photographed by Eric Steelberg and chicly designed by Steve Saklad -- looks quite splendid.

(Rated R by the MPAA for language and some sexual content.) Print this post
Posted by Harry Forbes at 9:56 AM