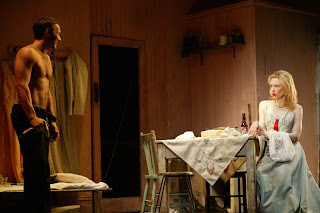 Though the generally excellent Roundabout production with the late Natasha Richardson is still fresh in mind, this gripping and revelatory production of Tennessee Williams’ oft-revived 1947 classic here becomes a new experience. The wonder is that it arrives on our shores courtesy of Australia’s Sydney Theatre Company, currently run by actress Cate Blanchett and her husband Andrew Upton, and that it is directed by the great Norwegian actress Liv Ullmann.

Blanchett takes on the role of Blanche DuBois, and she is truly one of the great ones. Those who only know her by her excellent movie work will be newly impressed with her masterful delivery and riveting stage presence. Of all the Blanches I’ve seen, her cadence comes closest to Vivien Leigh in the film, though her timbre is huskier and lower. Perhaps she sounds something akin to Tallulah Bankhead who played Blanche in the mid-1950s.

Though she plays Blanche with more overt calculation that I’ve seen before, the mental fragility and yearning for refinement, good manners, and culture are palpable. Blanchett brilliantly captures all the contradictions in the character.

I found Joel Edgerton’s Stanley Kowalski quite the most satisfying since Brando. Though Alec Baldwin, James Farentino, Aidan Quinn, Treat Williams (on television), and others have hardly been slouches in the role, Edgerton better succeeds in conjuring the requisite Brando-like animal magnetism without ever falling into mimicry.

Robin McLeavey’s Stella is equally strong, projecting an appealing easy-going earthiness, strength of character, and tender compassion for her sister. The husband-wife dynamic is especially well delineated. And this trio anchors the play superbly.

Tim Richard’s very working class Mitch vividly shows how his ill-treatment of Blanche, when he learns of her sordid past, is borne of hurt not malice.

All those iconic lines – Stanley’s pitiful cry for “Stella,” and Blanche’s “I’ve always depended on the kindness of strangers” – sound freshly minted. In Ullmann’s compassionate view, all the characters are, in some way, hurting, and their sometime cruelty masks deep vulnerability.

Even Stanley’s climactic sexual union with Blanche is played with both characters drunk, not as a rape but with Blanche a willing participant. A brief tableau after the blackout – Stanley sleeping nude face down, Blanche sitting calmly on the back of the bed – confirms the concept, which seems radical but actually works.

Blanche’s final exit, removed from the Kowalski home by a doctor and nurse for a mental institution, shows her walking solo towards the light in the wings, and would seem to suggest a final liberation from her demons. This was another brilliant stroke on Ullmann’s part.

Ralph Myers’ New Orleans’ French Quarter set is intentionally drab, the walls of the Kowalski railroad flat are an ugly pink. There are some Edward Hopper-like tableaux we observe through the window of their upstairs neighbors, the Hubbells (Mandy McElhinney and Michael Denkha), but the vast gray masking which predominates, though accentuating the Kowalski’s cramped quarters, is simply uninteresting. Still, we can see, as never before, the extent of Blanche’s intrusiveness.

Matters of set decoration aside, if this production were on a bare stage, the performances and direction would carry all before them. Definitive is a dangerous word – and perhaps the Elia Kazan film with three out of four of the original cast deserves that moniker (despite some period censoring of Williams’ text) – but I don’t expect to ever see a finer production than this one.