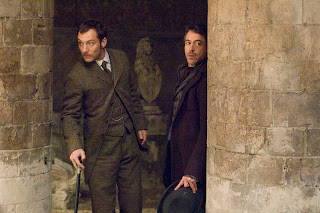 This is a fast moving, revisionist take on Arthur Conan Doyle’s endlessly popular sleuth, consistently engaging, if not totally gripping.

Robert Downey, Jr., who demonstrated how well in can play British in “Chaplin,” again affects a thoroughly convincing accent and demeanor. But his scruffy, perennially tousled Holmes is a far cry from Basil Rathbone or Jeremy Brett. Proficient at martial arts and swordplay, this Holmes is a fierce pugilist, as we see when he takes on a boxer in a working class pub. And you’ll look in vain for the familiar deerstalker hat.

His sidekick Dr. Watson is not in the fuddy-duddy Nigel Bruce mold, but closer to Doyle’s concept of more active partner. He’s an Afghan War veteran on the brink of marriage to Mary Morstan (Kelly Reilly), and he’s played with dapper, mustachioed charm and agility by Jude Law.

The plot pits them against the villainous Lord Blackwood (versatile Mark Strong), a purveyor of the dark arts. He’s sentenced to hang fairly early in the story, after a series of ritualistic murders of young women. But he seems remarkably blasé about the impending noose.

And sure enough, after the hanging, it would appear he is not dead, even though Watson had solemnly pronounced him so. Adding spice to the dirty doings is the dark-haired American, Holmes’ old nemesis, double-dealing Irene Adler (Rachel McAdams) – from the short story, “A Scandal in Bohemia” -- with whom Holmes is smitten.

Director Guy Ritchie employs his usual quick-cutting, muscular style and maintains a confident, fast pace, but the general spirit isn’t quite right. He was on firmer ground with his last film, the twisty, clever “RocknRolla.”

Still, the performances here are all worth watching, and theater buffs will recognize Geraldine James – recently Gertrude to Jude Law’s Hamlet on Broadway – as Mrs. Hudson, Holmes’ housekeeper. Eddie Marsan is Inspector Lestrade of Scotland Yard, disapproving of Holmes’ unorthodox methods, but grudgingly grateful for the help.

Sarah Greenwood’s production design is gorgeous: a teeming, grimy 1890s London come to life, though the action -- which includes an exciting finale atop the only partially constructed Tower Bridge -- has that contemporary feel.

Hans Zimmer has composed a tense, pulsating score and special mention should be made of the evocative period credits.

Those devoted Holmes fans, the Baker Street Irregulars, could tell us how true in spirit to Doyle is the script (by Michael Robert Johnson and Anthony Peckham and Simon Kinberg) but matters of plot notwithstanding, I think many will find the end result a diverting enough couple of hours, but somehow not the Holmes they revere.

(The film has been rated PG-13 by the MPAA for intense sequences of violence and action, some startling images and a scene of suggestive material.) Print this post
Posted by Harry Forbes at 1:37 PM