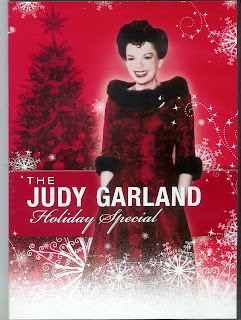 The much recycled Christmas favorite, Judy Garland’s Christmas show from her 1963-1964 series, which has already been issued on VHS tape, laserdisc, and even DVD (on Pioneer a few years ago), appears again as a stand-alone in Infinity’s piecemeal reissue of the series.

But however familiar, its return is welcome, and it looks better than ever in its latest incarnation.

The show, which aired December 22, 1963, featured a living room set which purported to show its star at home with her young children, Lorna and Joey Luft, both appearing quite cute and unspoiled. The sophisticated Garland hardly registered as an average TV mom, but her warm rapport with the children was genuine, and their adoration of her palpable.

Musically, the show is top-notch, and Garland is in excellent voice for that period. She opens with her “Meet Me in St. Louis” classic, “Have Yourself a Merry Little Christmas,” sung to Lorna and Joe by the window, just as she did with Margaret O’Brien in the MGM film.

Then, she and the kids launch into “Consider Yourself” from the then-current “Oliver!” They’re shortly joined by daughter Liza Minnelli who “drops in” with her “beau” Tracy Everitt.

After Joey is hoisted on the piano for a very sweet (and surprisingly accomplished) “Where is Love” from the same show, Liza and Everitt entertain the others with a modestly choreographed “Steam Heat” from “The Pajama Game.”

Garland solos affectingly with “Little Drops of Rain” from her animated “Gay Pur-ee” after which Jack Jones “drops in” with a jazzy version of “Wouldn’t It Be Loverly?” Buffs will recall Garland performed with tenor Allan Jones in 1938’s “Everybody Sing” but son Jack has matured sufficiently to come across as Garland’s peer here.

Jones performs his hit “Lollipops and Roses” (not exactly a Christmas tune) as the others sit at his feet, and then Lorna sits on his knee to belt out “Santa Claus is Coming to Town.”

A medley of carols follows, with Garland delivering a full-bodied “What Child is This?” that rates as her finest vocal moment on the show.

The hour concludes with Garland snuggling with Joe and Lorna on the sofa as she serenades them with “Over the Rainbow,” according to the hour's conceit, an annual tradition in the Garland home.

The DVD offers the original mono soundtrack or 5.1 surround sound. Print this post
Posted by Harry Forbes at 4:49 PM