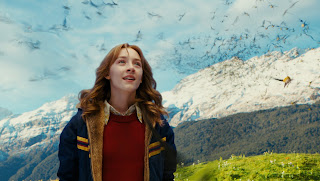 Peter Jackson’s well-crafted adaptation of Alice Sebold’s best-seller walks an offbeat line between child serial killer thriller and New Age fantasy. I’ve not read the book, but taken on its own terms, I found the movie compelling, even if sometimes off-putting in its tonal shifts.

Saoirse Ronan, the trouble-making child from “Atonement,” here plays 14-year-old Susie Salmon, a happy suburban teenager who lives with her parents Jack (Mark Wahlberg) and Abigail (Rachel Weisz), and siblings Lindsey (Rose McIver) and Buckley (Christian Ashdale) in Norristown, PA. Susie narrates the story, and even as she cheerfully relates the commonplace details of her domestic life, including her passion for photography and crush on the handsome Ray (Reece Ritchie) at school, she matter-of-factly informs us that she is fated to be murdered.

The perpetrator will be her next-door neighbor Mr. Harvey (Stanley Tucci). We are mercifully spared visuals of the heinous act, but the circumstances that lead up to it are disturbing enough, as the bespectacled, seemingly mild-mannered loner entices her to view an underground hideaway in the middle of a cornfield.

After her death, her father -- whom we already know has an obsession with scale modeling (i.e. ships in bottles), much as Harvey does for intricate dollhouses -- becomes fanatical about finding the killer, and barrages Detective Len Fenerman (Michael Imperioli) with names of scores of likely suspects.

Abigail ultimately can’t abide Jack’s neurotic behavior and moves out, leaving the family in the care of her good-hearted, if hard-drinking and chain-smoking mother Lynn (a campy Susan Sarandon with big hair and 70’s eye-liner).

Meanwhile, Susie has gone to an “In-Between” place between heaven and earth, a brightly-hued digital landscape of instantly changing seasons, something akin to the Horse of a Different Color in “The Wizard of Oz,” you might say. A celestial friend, Holly (Nikki SooHoo), urges her to leave earth behind, and continue onwards to heaven, but Susie can’t leave until matters are resolved, and her murderer gets his just desserts.

These scenes are imaginative, and suggest some of the Salvador Dali sequences in Hitchcock’s “Spellbound,” but hardly conjure a place of surpassing loveliness.

Besides being consumed with deep concern for her family, Susie regrets a never-kept meeting at the local mall with Ray, who mourns her loss along with psychically-attuned classmate Ruth (Carolyn Dando) who had a fleeting contact with Susie’s spirit the night of the latter’s murder. We are told she “accepts the dead among the living.”

Years pass, kid sister Lindsey grows, and also comes under the watchful eye of Harvey, the only person who, unlike the book, has not attracted Jack’s paranoid scrutiny. It’s strange that even though Lindsey feels the jitters every time she passes Harvey’s curtained house, she never confides in her father.

Ronan’s radiant exuberance as Susie makes her death all the more tragic. Wahlberg’s agonizing grief is well conveyed, but he and Weisz are so lightly sketched in Jackson’s script (written with Fran Walsh and Philippa Boyens), that we can scarcely empathize with them except in the most generalized terms. (Federman’s relationship with Abigail from the book has been jettisoned here.)

Sarandon provides some spice, though she seems to be a different movie altogether. Tucci is downright superb giving the creepy killer just the right mix of bland congeniality and sinister disingenuousness.

The overdone visuals detract from the crime story on earth, but Jackson’s mastery of his craft is never in doubt. There are some tremendously suspenseful sequences such as when Federman grills Harvey as an incriminating bracelet of Susie dangles a few feet away, or when a snooping Lindsey finally breaks into Harvey’s house. So, too, the story’s moral -- how the living must accept death, allowing their departed loved ones to move on, literally or figuratively – is clearly conveyed.

But even if the spiritual and police procedural elements never really gel as satisfyingly as they were said to do in the book, this is still a fascinating story told with a wealth of imagination.

(Rated PG-13 by the MPAA for mature thematic material involving disturbing violent content and images, and some language.) Print this post
Posted by Harry Forbes at 7:18 AM