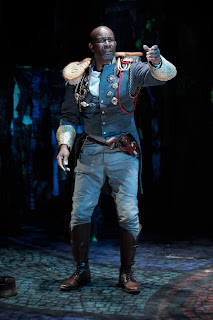 After its critically-acclaimed and sold-out limited run at the Irish Repertory Theatre, the powerful revival of Eugene O’Neill’s expressionistic work has deservedly transferred to a new venue.

Brutus Jones is a former Pullman porter and ex-con who sets himself up as “emperor” of a Caribbean Island, duping the natives (“bush niggers,” he calls them disdainfully), and making his fortune. When, after two years, the locals get wise, he is forced to flee the island through the dense forest in the dead of night where his bravado quickly diminishes.

John Douglas Thompson is simply sensational morphing from cocky arrogance and fearlessness in the opening scene on his throne to trembling helplessness as the woods close in on him (literally), and he’s surrounded by imagined ghosts – or “haunts,” as he puts it -- and fearful reminders of his past misdeeds. Thompson’s delivery of O’Neill’s naïve Negro dialect – performed as written -- is masterfully done.

Ciarán O’Reilly directs the 75-minute piece, surely one of the finest productions ever mounted by the Irish Repertory Theatre, with a tension that never lets up.

Charlie Corcoran’s setting is satisfyingly evocative, despite the small stage. The use of surreal costumes (Antonia Ford-Roberts), puppets and masks (Bob Flanagan) to evoke the spirits in the forest scenes is tremendously effective. Brian Nason’s moody lighting maintains the increasingly nightmarish mood.

And there is a powerful use of music and sound effects (Ryan Rumery and Christian Frederickson), including the escalating beating of drums that drives Jones mad, as he imagines the natives are approaching.

As Jones descends into madness, he recalls the man he murdered for playing with crooked dice, and the chain gang overseer he killed with his axe. He envisions himself a slave on an auction block, while specters of slave buyers waltz around, and later cowers before a witch doctor.

Peter Cormican is strong as Smithers, the alternately swaggering and obsequious Cockney trader who fawns on Jones, privately holding him in contempt. He and Thompson have the major speaking roles, but Sameerah Lugmaan Harris as the native woman who gives us the opening exposition, and Jon Deliz, Michael Akil Davis, Sinclair Mitchell, and David Heron, who comprise the all-important ensemble, are all first-rate.

This great production and Thompson’s outstanding performance should not be missed.