The Princess and the Frog (Walt Disney Animation Studios) 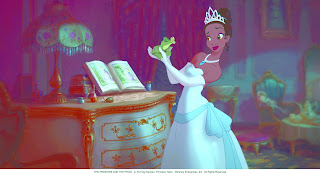 Disney’s welcome return to hand-drawn animation after a five year absence may not quite recall the golden age classics (as the Mickey Mouse “Steamboat Willie” logo would seem to herald) but with its lush backdrops, lively and tuneful score, and touching story, “The Princess and the Frog” offers reason enough to rejoice.

This is the first Disney feature to feature an African-American heroine, and she’s delightfully voiced by Broadway’s Anika Noni Rose. Not the Grimm brothers story of “The Frog Prince” as the title might suggest, the story is rather inspired in part by “The Frog Princess” by E.D. Baker.

In this spin on the eponymous fairy tale, Tiana is a young waitress who hopes to fulfill her late father’s (Terrence Howard) dream of opening a restaurant. (Oprah Winfrey voices Tiana’s mother.)

An irresponsible Prince named Naveen (Bruno Campos) comes to town, but though female hearts are aflutter, this prince -- who is anxiouis to marry well or else (gasp!) get a job -- has been turned into a frog after falling under the spell of witch doctor Facilier (Keith David). When as a spunky green amphibian, he begs Tiana, whom he takes for a princess, to bestow a restoring kiss, she turns into a frog as well.

Tiana and Naveen – now a sparring pair in the classic Hollywood tradition – go deep into the Louisiana bayou to find the ancient crone Mama Odie (Jenifer Lewis) who may be able to transform them back to human form. Along the way, they find allies in a giant trumpet-playing alligator Louis (Michael-Leon Wooley) who longs to join a jazz band and a wizened Cajun firefly Ray (Jim Cummings).

The animated backdrops of 1920’s New Orleans are gorgeous. I do wish the central figures were executed in more the old-style “realistic” Disney style. What’s here is more akin to the cartoony animation of “Aladdin” and “Hercules” than the more painterly “Bambi” or “Pinocchio.” It’s also a minor carp that Tiana and Naveen are relegated to frog status for most of the movie. Those who believe Disney’s “Cinderella” was ruined by giving too much screen time to the heroine’s mouse friends may have similar misgivings here.

But even if those amphibians may not seem the most romantic-looking of lovers, the story arc and good voice work eventually pull you in. There’s also a very sweet secondary romance in Ray’s adoration of a star he calls Evangeline which results in the film’s most poignant moments.

Directors John Musker and Ron Clements maintain a good pace, and their script (co-written with Ron Edwards) is imbued with the usual Disney themes of striving for your dream, honoring your parent’s memory, and bravely overcoming obstacles. “Never lose sight of what is important,” says Tiana’s sage hard-working father early on.

Randy Newman’s tuneful and infectious score is probably the jazziest Disney songfest since the Sherman Brothers work on “The Jungle Book,” and the orchestral score is lushly arranged. I particularly liked Tiana’s bouncy “Almost There” Mama Obie’s gospel-flavored “Dig a Little Deeper,” and Ray’s infectious “Gonna Take You There.” The soundtrack CD should be a treat.

(The film is rated G by the MPAA.) Print this post
Posted by Harry Forbes at 4:57 AM