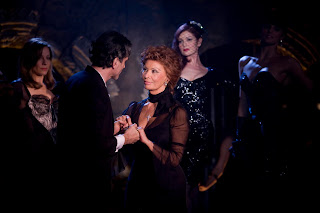 As with “Chicago,” the musical “Nine” has taken its sweet time to get to the big screen – and again, we have director Rob Marshall and Harvey Weinstein to thank – but 27 years after its stage premiere, the adaptation of Federico Fellini’s 1963 film “8 ½” is, at last, a movie, and a dazzling one at that.

Purists may object to changes to the overall concept and some missing songs – the “Grand Canal” sequence would have been fun to see onscreen, to name one -- but the show has been brilliantly reconceived in cinematic terms.

On Broadway, under director Tommy Tune’s direction, it was a superbly stylized staging as Guido Contini, a womanizing Fellini-esque movie-maker with a case of serious director’s block, played by the late Raul Julia, interacted with an all-female cast, excepting the handful of young boys who played Guido and his friends in the flashback scenes of his childhood. Maury Yeston wrote the multi-faceted score, with a book by Arthur Kopit, Jr. (Mario Fratti was credited with adapting the property from the Italian.)

The film’s screenplay is by Michael Tolkin and the late Anthony Minghella, his last project.

Marshall’s impressive cast of female star power -- not any of them known for extraordinary musical talent -- delivers the goods. Marion Cottilard (here singing in her own voice, after her Oscar-winning lip-syncing turn as Edith Piaf) is his long-suffering wife, Luisa; Penelope Cruz his sexy mistress; Nicole Kidman his muse Claudia who sings the show’s most beautiful and famous song, “Unusual Way” but otherwise has little screen time; Judi Dench, his costume designer, who appropriates Liliane Montevecchi’s “Folies Bergere”; pop star Fergie, the neighborhood prostitute from Guido’s childhood who sings the rousing “Be Italian”; and most apt of all, given her stature in Italian cinema, there’s Sophia Loren – “8 ½” star Marcello Mastroanni’s most frequent co-star – lovely and gracious as Guido’s mother.

The part of a “Vogue” journalist has been added to the mix, and she’s well played by Kate Hudson, but the part seems gratuitous, apart from explaining the phenomenon of Italian movies to today’s audiences. This she does in a lively pop-styled number called “Cinema Italiano,” one of three new numbers Yeston has written for the film.

As in “Chicago,” the songs are mostly fantasies, here in the mind of Guido. Each of the ladies has one big song, Cottilard two, her second a sexy strip number called “Take It All.” Loren’s number “Guarde La Luna” was adapted from the stage show’s orchestral “Waltz from ‘Nine.’”

Those who found the editing of “Chicago” too frenetic may find the cross-cutting more to their liking, though there are stylistic similarities. Marshall draws excellent performances from his cast, and brings his choreographic flair to the musical numbers, though the “Be Italian” number seems a tad too stylistically close to Bob Fosse’s “Mein Herr” from “Cabaret.”

Daniel Day-Lewis, with a suave Italian accent, replaced the originally announced Javier Bardem as Guido, and though certainly not the first person you’d think of for a musical, handles his musical chores just fine, and reveals a concentrated angst and Continental charm to this Casanova coping with mid-life crisis. Dench brings her characteristic tart delivery to her role as Guido’s confidante. Cruz makes a fetching, touching mistress, and her part has been considerably expanded from the stage. Cotillard is superb as Guido’s long-suffering, former actress wife.

This “Nine” rates a big Ten. Print this post
Posted by Harry Forbes at 3:44 PM