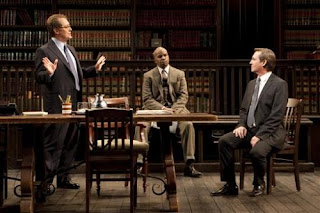 “Race” is an intriguing if not always plausible drama from David Mamet in his trademark rapid-fire, sometimes overly verbose, style that grapples with its titular theme head-on, particularly as regards black and white relations, and the shame and guilt that go with it. Matters of class and gender come into play as well.

The latest in a season rife with race-themed theater (e.g. “Superior Donuts,” “Memphis,” even “Finian’s Rainbow”), Mamet’s work is fashioned as something akin to a police procedural.

In fact, it is the star of “Boston Legal,” James Spader, who plays cocksure white lawyer Jack Lawson who’s in partnership with short-fused black lawyer Henry Brown (David Alan Grier). Well-to-do Charles Strickland (Richard Thomas) comes to them for representation as he’s been accused of raping a black woman, tearing her red-sequined dress (a vital plot point) in the process. He insists the act was consensual, but he’s conscience-stricken enough to seem to the partners like a dangerously loose canon, one who's even anxious to tell his side to the press.

The partners would as soon not take the case, but their (African-American) assistant Susan (Kerry Washington) – either by accident or design – has accepted Strickland’s check, and the case is ergo theirs.

Brown lays out the black-white multi-faceted conundrum right at the start in the snappy Mamet patois. The witty jibes ring true, but often register – much like the play as a whole – as academic debate, not the way people really talk.

Lawson is self-assured and not a little smarmy – the prototype of a cynical lawyer – and he comes to believe he can win the case, even though during the alleged sexual encounter, Strickland was overheard to utter a racist comment.

During the short first act, Susan is mostly an observer. In the second, she reveals issues of her own, especially when a detail about her hiring comes to light.

Is Strickland guilty? Thomas’ poker-faced performance and Mamet’s text really never tell us. But the play holds your interest, and the issues are thought-provoking.

Spader and Grier make lively sparring partners, and Grier (known mainly for comic roles) proves a solid “serious” actor, and though Washington and Thomas’ parts are comparatively small and their characters underdeveloped, both have their moments, particularly in the second act. There are strong overtones of “Oleanna” and “Speed-the-Plow” in the enigmatic Susan.

Mamet himself leads the proceedings with the special authority that generally comes when a playwright directs his own work, and “Race” is head and shoulders above his last new Broadway outing, last year’s comic “November.”