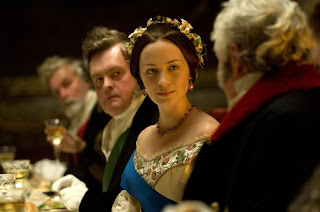 “The Young Victoria” is an engrossing historical drama about the early life of Queen Victoria (Emily Blunt).

The narrative charts her course from headstrong young woman determined not to allow her mother, The Duchess of Kent (Miranda Richardson) and advisor Sir John Conroy (Mark Strong) to form a Regency when King William IV (Jim Broadbent) should die (thereby blocking Victoria's succession); her eventual coronation; and, of course, her courtship with her German cousin, Prince Albert (Rupert Friend).

We see how she comes to vanquish her mother and Conroy with the help of the self-serving yet loyal Prime Minister, Lord Melbourne (Paul Bettany), who eyes her growing closeness to Albert with some suspicion.

Albert, in turn, is under the sway of his uncle – King Leopold of Belgium (Thomas Krestschmann) – who supports the match, assuming (wrongly) that Albert will be his pawn in England should a union ensue. But surprisingly, Albert and Victoria genuinely fall in love, though Victoria doesn’t, at first, commit to marriage.

When she becomes Queen at 18, she allows her allegiance to Melbourne to interfere with the government custom of allowing the new Prime Minister Robert Peel (Michael Maloney) to recommend members of the Queen's household staff. This obstinacy in keeping her former ladies in waiting causes a surprisingly vehement public backlash.

At her wit's end, she summons Albert back from Germany, and they marry. Rather than serve as a mere companion to his queen, Albert shows his mettle by recommending changes in the household, standing up to Melbourne, and after some initial opposition by Victoria, proving a strong ally. He has a persuasive advocate in King William’s wife, Dowager Queen Adelaide (Harriet Walter) who wisely helps convince Victoria to allow Albert to share her duties.

Like many historical films of late, “The Young Victoria” attempts to eschew the sometimes stodgy style of past period films, but Julian Fellowes' script has intelligence and wit, and movingly relates the great love story at its core. It also humanizes the monarch much as the famous Helen Hayes play “Victoria Regina” did decades ago, but in a pointedly more contemporary style.

The beautiful Emily Blunt would seem as unlikely a Queen Victoria as did Jonathan Rhys-Meyers' casting as Henry VIII on Showtime’s “The Tudors,” but she charmingly conveys the high spirited and determined young woman long before the monarch’s familiarly iconic image as a plump old lady perennially outfitted in black.

And Friend is especially appealing as her ardent suitor, but the entire cast is excellent, Broadbent having an especially good moment in a lavish banquet scene.

French-Canadian Jean-Marc Vallee directs at a good pace, and together with Ilan Eshkeri’s sumptuous score, and Patrice Vermette’s handsome production design make for above average entertainment.

Interestingly, Sarah Ferguson, The Duchess of York – who, after all, should know a thing or two about royal doings -- is among the producers who also include Martin Scorsese.

(Rated PG by the MPAA for some mild sensuality, a scene of violence, and brief incidental language and smoking.) Print this post
Posted by Harry Forbes at 1:27 PM