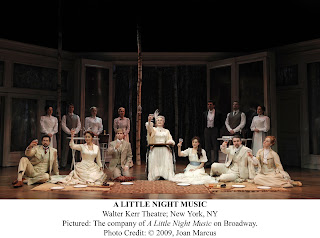 In light of this being Angela Lansbury’s second delicious Broadway triumph of the year as well as the beauteous Catherine Zeta-Jones’s long overdue Broadway debut, it seems ungracious to declare this production of arguably Stephen Sondheim’s most perfect work a bit of a letdown. But so it seemed to me, despite the direction being in the hands of the estimable Trevor Nunn.

For starters, the production – which originated at the enterprising Menier Chocolate Factory, a scruffy London Fringe theater (also be the genesis for the coming “La Cage aux Folles” revival) -- David Farley’s physical production seems just a tad too bare bones for Broadway.

Secondly, Nunn’s direction and the musical tempi (music director Tom Murray) of Jason Carr’s orchestral reduction seems deliberately slow. It’s as if they wanted us to be sure we heard every one of Sondheim’s delectable lyrics.

Odious comparisons or not, the end result is several notches below any number of revivals here and in London, both large and small. In the former category, I’d include the first City Opera revival with Regina Resnick, London’s first revival with Dorothy Tutin and Lila Kedrova, and the more recent Judi Dench revival at the National Theatre.

In the latter category were terrific chamber versions at Equity Library Theatre and the Opera Ensemble of New York. The last New York showing was a revival of the City Opera’s production with a starry cast including Jeremy Irons, Claire Bloom, Juliet Stevenson, Mark Kudisch, and Anna Kendrick, currently winning raves for her performance in “Up in the Air.”

Still, you can’t go too far wrong with this sublime property, and this undernourished production puts it across.

The excellent Alexander Hanson, a Nunn favorite and the sole import from the Menier/West End original, is an apt Frederick. (I saw him two decades ago as Henrik in the Tutin West End version.)

Hunter Ryan Herdlicka is an ardent Henrik. Leigh Ann Larkin has the right manner of the lusty servant Petra, and delivers “The Miller’s Son” confidently. Keaton Whittaker, one of two alternating Fredrickas, is one of the production’s bright spots.

I found Aaron Lazar’s Carl Magnus more austere than dashing – intentional I’m sure -- but he sang the part well. Erin Davie was appropriately acerbic as his neglected wife Charlotte.

Though her stage time is limited, Lansbury makes the most of the wheelchair-bound Madame Armfeldt, and delivers a “Liaisons” that ranks with the best of past interpreters like Sian Phillips, Elizabeth Welch (on record), Evelyn Laye, and or course, the great originator, Hermione Gingold. But all of Lansbury’s inflections were unique and brilliantly judged. Could a sixth Tony be in the offing?

Though most movie fans are unaware of the fact, Zeta-Jones is a veteran of stage musicals starting as a youngster in a legit version of “Bugsy Malone” in the West End. She looks lovely in her period costumes, with upswept hair and holding herself with gleaming confidence. She sings well, too, delivering a moving “Send in the Clowns.” And yet for all of that, I felt she was not quite right. She projects a contemporary manner, rather than Old World sophistication, and surprisingly, for such a deliberately paced production otherwise, rushes some of her lines.

The show’s biggest misfire is Ramona Mallory’s Anne. Though it was reasonable to assume her pedigree – daughter of the original Anne and Henrik, Victoria Mallory and Mark Lambert -- might result in a definitive performance, she overdoes the giggling immaturity, and her voice lacks the crystalline purity others have brought to the role.

Flawed though it is, Hugh Wheeler’s witty book and Sondheim’s now classic score, and the ladies above the title, still add up to superior entertainment.