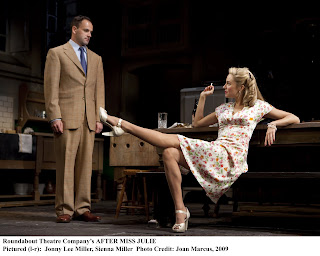 Patrick Marber’s adaptation of August Strindberg’s “Miss Julie” transposes the action from 19th Century Midsummer’s Eve Sweden to 1945 England on the eve of the Labor Party’s win. Despite the cosmetic changes that transposition requires – and allowing that the parallels between 19th century Sweden and post-World War II England are not, in all cases, apt -- his version, presented by Roundabout Theatre Company, remains remarkably faithful to the original and, I think, rather more interesting for a modern audience.

The class distinction at the heart of Strindberg’s 1888 original – a trendsetter in naturalistic drama with the action taking place in “real” time, its characters significantly molded by their environment – is accentuated by Marber’s tweaking. He’s also ramped up the sex and the violence, including a wince-inducing crotch-grabbing near the end.

In this version, Churchill’s political defeat serves as a plausible metaphor for the societal change which may soon blur class distinctions. Rather than the lovers talking of opening a hotel in Como, Italy, it’s now a bar in New York. But most of the other particulars are the same.

The character of Miss Julie can be a head-scratching paradox. Raised to despise men by her feminist mother, and just jilted by her fiancée after taking a riding whip to him, she genuinely falls for the manly servant.

But one minute she’s a sexy seductress, demanding that John dance with her among the revelers upstairs, regardless of what anyone thinks. She insists he kiss her shoe, and then teasingly pulling it away. She offers a kiss one moment, slaps him the next. First a kinky lady with sadomasochistic tendencies, she becomes a vulnerable romantic genuinely in love with the man who’s loved her from afar since he saw her in her pram when they were children. And then she flip-flops again.

Despite her tabloid notoriety, Sienna Miller has proven a fine actress on screen, so it’s not too much of a surprise to find her a confident stage actress who handles these mercurial changes in temperament so adroitly.

Jonny Lee Miller – who does have a solid stage background -- skillfully delineates the working-class man so entrenched in the class system in which he was raised, and a former soldier whose every movement reflects a precise military bearing. The mere ringing of a bell is enough to reduce him to instant subservience, furiously polishing his master’s shoes.

The quality of the star performances is matched by Marin Ireland who plays Christine, the cook and fiancé of John, especially when she discovers what has transpired between the furtive lovers, and registers more anger about the situation’s impropriety than her fiancé’s infidelity, suddenly taking control with bold assurance.

The play’s ever shifting motivations can be somewhat maddening. It’s probably not for nothing that revivals in New York have been so few.