Michael Jackson’s This Is It (Columbia Pictures) 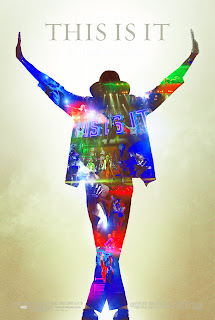 I must confess I am one of the few who never followed Michael Jackson’s career with much interest, and the tabloid stories during his lifetime and after his death only convinced me that I was none the poorer for it.

But having seen the documentary culled from rehearsal footage shot from March through June of this year for what would have been Jackson’s live concert comeback, I came away awed at his talent, humility, and sheer professionalism.

And far from being a frail, washed out shadow of his former self, Jackson seems totally in command of his considerable gifts. Though he speaks of holding back vocally to conserve his voice for the actual performances, he certainly sounds fine to me.

Some critics have carped that the release of this footage is crass commercialism, and that Jackson wouldn’t have wanted it shown (as it was intended merely for his own archives), but I strongly disagree. There is nothing here of which Jackson would be ashamed, and his legacy would have been poorer had it been withheld.

There always, of course, a morbid fascination with the final footage of a popular idol. Marilyn Monroe’s scenes from her unfinished “Something’s Got to Give” were rushed out after her death in a documentary narrated by Rock Hudson. Jean Harlow’s extant scenes from “Saratoga” were used when the film was finished using a double where necessary. And Heath Ledger’s final work in “The Imaginarium of Doctor Parnassus” will soon be released, his part finished by three actors. “Last” recordings and concerts of musical performers are similarly valued, from Elvis to Rosemary Clooney.

I found it quite thrilling to watch Jackson – or “MJ” as his director Kenny Ortega (also the director of the documentary) affectionately calls him – executing his choreographed moves with razor-sharp precision, and using (or not using, by choice) his voice.

His ear for music was obviously acute, and it’s interesting to see him tactfully tell a couple of the musicians what he wants. “I’m getting there,” says the musician. “Well, get there,” replies Michael quietly but firmly. Later he says of a musical intro, “You gotta let it simmer.” He knew just what he wanted. His musical director Michael Beardon praises Jackson for being “very hands on…he knew all his records.”

There’s very little in the way of temperament. At one point, he stops the rehearsal to tell director Kenny Ortega that he’s having trouble with his earpiece, but he’s extremely polite about it. When something needs to be done over, he assures everyone with calm logic, “That’s why we have rehearsal.”

The act itself, which would have taken place beginning this past summer in London’s O2 Arena would have included pyrotechnics, aerialists, pole dancers, and elaborately filmed backdrops. There was a fun private eye sequence which had Jackson interacting with the celluloid images of Rita Hayworth, Humphrey Bogart, and Edward G. Robinson, which would have segued into his live rendition of “Smooth Criminal.”

There’s an extended environmental sequence, quite stunningly done, which would have been the backdrop for “Earth Song.” And Jackson’s concern for the planet seems utterly sincere and impassioned.

The dancers, musicians, wardrobe designers, who were hired for this tour, speak of Jackson with great awe, some even in tears at their elation in working with him. One can only imagine how shocked and saddened they were at his sudden death, particularly as Jackson looks so well.

We see the press conference announcing the London shows as his last performances there (“This is it,” he said), and in which he signs off prophetically with “This is the final curtain call.”

Ortega has done a masterful job of pulling the extant footage together, and coming up with a handsomely shot and fascinating look at the creative process. Is it as Jackson’s pal, the actress Elizabeth Taylor, has so gushingly proclaimed on Twitter, “the single most brilliant piece of filmmaking I have ever seen.”? Well, no. But she was right in proclaiming his genius.

The film – filled as it is with such great anticipation of Jackson’s triumphant return and the upbeat attitude of all concerned – registers as a surprisingly joyful experience, even as you’re periodically caught up short by the tragedy that was to come.

(Rated PG by the MPAA for some suggestive choreography and scary images.) Print this post
Posted by Harry Forbes at 12:50 PM