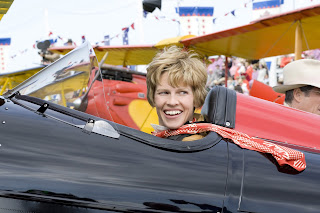 This is an absorbing, old-fashioned (in the best sense of the word) biopic about the pioneering aviator and feminist Amelia Earhart, and offers Hilary Swank (who also executive produced) one of her most congenial roles.

Though the emotional wattage is low, the filmmakers are to be credited with not trying to overly embellish the already fascinating facts of Earhart’s life, one which ended so intriguingly when, in 1937, her plane was lost during an around-the-world flight apparently unable to locate the tiny Pacific island at which she had to refuel.

Directed by Mira Nair with a sensitivity that avoids the cliché of much of glossy Hollywood product, and with a screenplay by Ron Bass and Anna Hamilton Phelan – which uses Susan Butler’s “East to the Dawn” and Mary S. Lovell’s “The Sound of Wings” as its primary source material – the narrative charts the relationship between Earhart and George P. Putnam (Richard Gere), the publishing magnate and publicity hound who, in 1928, hired her to fly across the Atlantic (the first woman to do so, albeit not in the pilot’s seat), and later became her husband.

The film also explores her relationship with pilot and businessman Gene Vidal (Ewan McGregor), father of writer Gore Vidal who figures in the story as a child (Wiliam Cuddy) who looked to Earhart as a second mother.

As the facts of Earhart’s alleged romance with Vidal are sketchy, the film is admirably reticent in dramatizing what really went on between them. But suffice to say, there’s suggestion of a strong attraction, enough to raise the dander of Putnam when he finds a loving missive from his wife to Vidal.

Earhart’s subsequent solo flight across the Atlantic is nicely done, and her endorsements for various products provide a light interlude.

Swank – with short blond hair, generous teeth and a winning smile -- makes an appealing heroine, and uses an authentic sounding accent to boot. She makes Earhart’s passion for flying and enthusiasm for advancing women in male-dominated fields very plausible. Gere radiates his usual low-keyed charisma, and McGregor cuts a handsome figure as Vidal who would head the Bureau of Air Commerce during the Roosevelt administration.

The film is less action- than chick-flick, though there’s plenty of aerial activity but we mainly have Swank torn between her handsome leading men, even as her character asserts she needs her freedom as a “vagabond of the air.”

Still, the central love story of Earhart and Putnam is touchingly conveyed from their first romantic dance (to Ethel Waters’ version of “Moonglow,” a nice, unhackneyed choice) to their final long-distance conversation.

Stuart Dryburgh’s soft-grained cinematography captures the copious period trappings nicely, and helps give the film a more art hourse quality than other films of this genre.

Nair might not be the first choice for this sort of material, but her direction also gives the film a unique flavor, and she elicits good performances from all, including Christopher Eccleston as Earhart’s alcoholic navigator Fred Noonan who shares her final fateful flight on her beloved Lockheed L-10 Electra plane and Cherry Jones who delivers a sharp cameo as Eleanor Roosevelt who takes her first night flight with Earhart.

Earhart’s final flight is the most suspenseful part of the film, though our knowledge of the outcome can’t help but dilute some of the tension.

(Rated PG by the MPAA for some sensuality, language, thematic elements and smoking.) Print this post
Posted by Harry Forbes at 1:06 PM