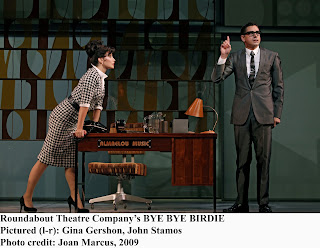 It’s perhaps an exaggeration to claim that the revival of “Bye Bye Birdie” – the first on Broadway since its original production 48 years ago -- is devoid of any entertainment value.

The basic property – Michael Stewart’s book, and Charles Strouse and Lee Adams’ music and lyrics -- is solid (as schools and community groups have known for years), and the the cast and production team are not without interest. The touristy crowd at a recent Saturday night performance seemed to have a good time.

But there’s also no denying that much of the Roundabout’s production has come out curiously wrong.

The cast is a mixed bag. John Stamos – looking a cross between Treat Williams and Jerry Lewis -- is a perfectly valid Albert Peterson, the would-be English professor waylaid by a music business and now manager to an Elvis-like teen idol about to be drafted. Stamos sings pleasantly, moves well, and has the measure of role, but the effort (and the sweat, literally) sometimes show.

Gina Gershon – so hilarious in last season’s ‘Boeing Boeing” – is logical enough casting as Albert’s secretary and love interest Rose. Yet her singing is never quite incisive enough, and though the relatively little dancing allotted her is gracefully accomplished, the terpsichorean aspects of the role are short-changed.

Dee Hoty is good but wasted in the smallish part of Kim's mother, and though Jayne Houdyshell moves through the battleaxe part of Albert’s nagging and bigoted mother like a pro, she's saddled with a really distasteful part

The prize for wrong-headedness goes to Bill Irwin as Kim's father. His broad mugging and arch accent read as desperate attempts to break the inimitable mold formed by original Paul Lynde. Irwin’s clownish shenanigans as he hogs the camera on “The Ed Sullivan Show” is reasonably valid, but nothing else. Irwin should ditch all the shtick forthwith and play the part straight.

The awkwardly staged American history tableau on the Sullivan show is the nadir of director Robert Longbottom’s cartoony TV sitcom staging, something like the equally misguided production of “Bells are Ringing” several years ago. Adding to the cartoon atmosphere are Gregg Barnes’ garish costumes, which include color-coded outfits for the families in Sweet Apple.

Longbottom’s choreography enlivens the show’s best musical number, “A Lot of Livin’ to Do.” That, “Talk to Me,” and “Rosie” are the musical highpoints, and they’re all clustered in the second act.

On the whole, this feels like a pocket-sized “Birdie,” with everything smaller-scale than a full-out revival should be. That said, Andrew Jackness’ set is resourceful, including the train that brings Birdie into Sweet Apple, and the movable platform cleverly used throughout. Jonathan Tunick’s orchestrations – for a smaller band than the original – are, as one would expect from him, expertly done, but listen to the original cast CD and you remember what you're missing.

The show aside, high marks go to Henry Miller’s Theatre, an attractive and comfortable performance space that will make a welcome venue for future – happier – Roundabout productions. Apart from the restored neo-Georgian façade of the 1918 theater, all the rest is spanking new.