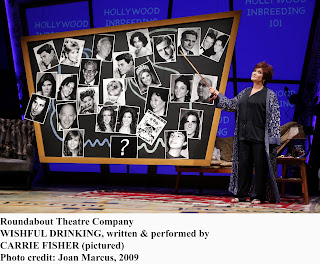 “If my life wasn’t funny, it would just be true. And that would be unacceptable” Carrie Fisher announces with unsentimental logic at the top of her show.

Carrie Fisher’s life has had its share of recreational and prescription drugs, booze, bipolar disorder, and occasional scandal. How about a gay Republican lobbyist found dead in her bed for starters?

But what’s surprising is that despite any mental turmoil – “when you’re manic, every urge is like an edict from the Vatican” -- she has crafted such a beautifully disciplined, carefully wrought self-examination. Her one-woman, two-act performance piece – which, before this Roundabout Theatre Company production, started life in at the Geffen Playhouse in 2006, and has since played around the country – also succeeds in creating a rare intimacy between player and audience.

In her first act centerpiece -- a hilarious lesson she’s dubbed “Hollywood Inbreeding 101,” bulletin board, pointer, and all -- she recounts not only the once headline-dominating tale of how father Eddie Fisher consoled the widowed Elizabeth Taylor after the latter’s husband Mike Todd went down in a plane crash, bringing his seemingly lovey-dovey marriage to Debbie Reynolds to a disillusioning end. Think Brad, Jennifer, and Angelina, she reminds the younger folk in the audience.

Even for those old enough to remember the tabloid stories, this is quite an incredible saga, and the head-spinning litany of her parents’ ensuing marriages and divorces boggles the mind. So, she concludes impishly, if her daughter dates Mike Todd’s born-again Christian grandson, is it incest? (The question may give you pause.)

Drama school and her casting as Princess Leia in “Star Wars” – silly hairdo and all – round out the first act. It’s her off-again, on-again relationship (and marriage) to Paul Simon (immortalized in several of his songs), a second marriage to an agent who left her for another man (after fathering her daughter), and Fisher “invited” to enter a mental hospital are highlights of the second.

Under the sympathetic direction of Tony Taccone, Fisher – now attractively plump -- maintains a likable good humor and somehow avoids bitchiness even as she spins her incredible tales, because if this is a “tell-all” the number one target is herself, though yes, there are some juicy bits. Probably the most eyebrow-raising anecdote involves Reynolds’ apparently serious suggestion that her daughter might let herself be impregnated by Reynolds’ latest husband. (Fisher demurred.)

As Fisher’s maternal grandfather said, “A fly is as likely to land on a pile of shit, as on a pie.” She triumphantly proves it’s all how you look at it, her theme song “Happy Days Are Here Again,” bearing an only mildly ironic sting.