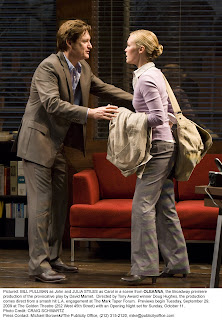 David Mamet’s 1992 play about political correctness and sexual harassment (written in the wake of the Clarence Thomas and Anita Hill brouhaha) gets its first Broadway mounting in a taut production first mounted at the Mark Taper Forum this summer.

Bill Pullman and Julia Stiles are first-rate as John, a university professor poised for tenure, and Carol, his failing student who shows up at his office to entreat him not to fail her. In the course of the meeting, during which he’s continually interrupted by calls from his anxious wife concerning purchase of a new house, John relents if she’ll agree to some private tutoring. During one of her emotional outbursts, he puts his hands on her shoulder to comfort her.

In the two scenes that follow, we learn that she has lodged a harassment suit against him, placing his tenure and even his job in serious jeopardy. Quiet, contained, and insecure in the first act, suddenly the tables are turned, and now with the backing of her unseen support “group,” she is in the driver’s seat.

As directed by Doug Hughes – whose concurrent work on “The Royal Family” demonstrates an impressive versatility – the tension over the 80-minute running time is well sustained, despite some longueurs, courtesy of the rambling dissertations Mamet has given John.

Egotistical, a tad patronizing, and occasionally insensitive, John mostly registers as Mr. Nice Guy, with Carol a generally hard-edged and unsympathetic adversary. Carol says she feels stupid in not understanding John’s lectures or his book. John tries to explain how, afflicted by many of the same insecurities, he worked through it. She claims he uses elitist language, and calls him on his use of “transpire” instead of “happen.”

A couple of times, just as Carol seems about to reveal something about her past that might inform her actions, John walks away to answer the phone. And yes, he yaks on too much about his own background. But is this really an abuse of power?

She, on the other hand, reads as mostly whiny and strident. When she presses charges, claiming he crossed the propriety line, it’s difficult to empathize with her. Thus, the sides don't seem equally balanced. And would Carol, especially after formally lodging her complaints, continue to return to John's office?

Still, if "Oleanna" is basically an academic exercise in the culture wars, it is not an uninteresting one. There are talk-backs after each performance to discuss the play’s sstill-relevant themes. Whether you stay or not, you’ll likely exit the theater in lively discussion.

Neil Patel has designed a perhaps too spaciously deluxe office for this as-yet-untenured professor, the warmth of the décor offset by the loudly grinding metal blinds which rise up and down between scenes, setting an appropriately ominous tone.