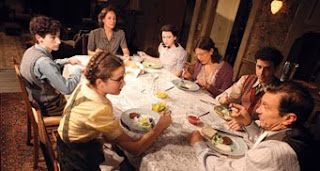 It will be most unfortunate if the provisional closing notice posted for Neil Simon’s play about his Brooklyn childhood really does result in the show’s shuttering, for this is a very fine revival in all respects. And I have no doubt the companion piece, “Broadway Bound,” which was set to join this one in repertory on November 18, would be just as satisfying.

Why have tickets not been selling? Could the long-running 1983 original still be so fresh in people’s memories? Is it familiarity with the not-so-hot film? Does the title somehow fail to set the pulse racing? Are we too confident in thinking we know what a Neil Simon play is going to be?

Whatever the reason, what is strikingly clear from David Croner’s revisionist production is that this is a very fine play indeed – one that should be considered a modern classic -- and its mounting here is the impeccable sort one might find at London’s Royal National Theatre.

The setting is Brooklyn in the late 1930’s. War is imminent, and money is painfully tight, and the family has relatives in Poland whose safety is in jeopardy.

Eugene balances his passion for baseball with his growing interest in writing and obsession with cousin Nora’s breasts (or those of any naked woman, for that matter), providing non-stop sardonic commentary on the family’s foibles.

In the first act, Stanley stands up to his boss when he defends a black co-worker and nearly loses his job, and Nora has a chance to audition for the chorus of a Broadway musical, but it will mean quitting school. Only Jack can mediate these issues, but he’s weary after a long day at his two jobs, and the dinner scene where his advice is tentatively sought is a comic highpoint.

In the second act, we learn Jack’s hard work has indeed lead to a mild heart attack, Blanche plans for a date with the alcoholic Irish man across the street, against her sister’s wishes, Nora pushes her independence, and Stanley loses his paycheck in a poker game. There are laughs in all these plot developments, but poignancy dominates.

Under Cromer’s direction, the play has taken on genuine gravitas, but the humor is all the richer. The scenes between the brothers are particularly touching, as are the interactions of Kate and Blanche. In fact, all the performances are just about perfect, and make a well-tuned ensemble.

“Brighton Beach Memoirs” is one of the highlights of the season, and with any luck, will get an eleventh hour reprieve, but hurry to see it Sunday, in case not.