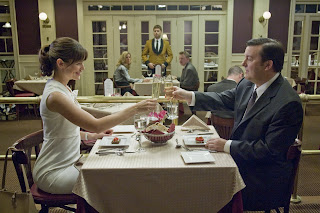 This deceptively innocuous – but surprisingly subversive -- romantic comedy starts out amusingly enough. The Massachusetts setting suggests small town Americana, but in this parallel universe, the concept of lying has not yet been invented, and everyone speaks the bluntly honest truth at all times. Even the signage tells it strictly like it is: a lodging is a “Cheap Motel for Intercourse with the Nearest Stranger.” A bar is a “Cheap Place to Drink.” And so on.

Ricky Gervais plays Mark Bellison, an unsuccessful screenplay writer. He works for Lecture Films, purveyors of filmed lectures (all there is, as there’s no such thing as fiction), run by the perpetually exasperated Anthony (Jeffrey Tambor). Tina Fey is rather wasted as a bitchy receptionist. (Some other stars, like Philip Seymour Hoffman and Edward Norton make cameo appearances.)

Mark is hopelessly smitten with the patrician Anna (played appropriately with fable-like innocence by Jennifer Garner), cousin of his best friend Greg (Louis C.K.). They go on a date. But though she later admits she enjoyed his company, she feels their relationship can go no further as he’s “not in her league,” and she worries they’d have fat kids with little snub noses. And that would never do.

Anna is also pursued by Mark’s handsome but dim and mean-spirited office rival Brad (Rob Lowe), whom she believes would provide a more suitable genetic match, even as her friendship with Mark deepens.

When Mark loses his job, and is about to be evicted from his apartment, he inadvertently secures the needed rent money when the bank teller misinterprets his faltering remark about the size of his account. She assumes a bank error, and blithely hands over the desired amount.

Having thus uttered the world’s first lie, he soon puts his new gift to further use, not just raking in money for himself and his Greg, but with compassionate (if not truthful) words lifting the spirits among all he encounters, including his suicidal neighbor Frank (Jonah Hill).

Things take a darker turn at the deathbed of his ailing mother (Fionnula Flanagan). When her doctor (Jason Bateman in a cameo role) bluntly informs her she’s about to die, she cries piteously how she dreads the nothingness of the afterlife. As the “lie” of religion has not yet been invented, Mark improvises a version of heaven and an all seeing “man in the sky,” while he doctor and his staff listen in hushed wonderment.

She dies peacefully, but before long, word spreads of Mark’s wisdom on spiritual matters, and he’s compelled to hold a press conference on his front porch – delivering a modern-day version of the Ten Commandments written on Pizza Hut boxes – describing in humane terms concepts we would call God, heaven, hell, and sin. But it’s merely a salve to a gullible populace. Later, dejected at Anna’s engagement to Brad, he becomes a recluse, with a Jesus beard and bed sheets.

Ironically, Gervais -- who also co-wrote and directed the film with Matthew Robinson – gives perhaps his most sympathetic performance yet, but in addition to the tonally misguided script, the direction is singularly uninspired.

Those of a non-believing frame of mind may find this just their cup of tea. Others will be less pleased about the film’s underlying atheistic message, despite the surface gloss. Does a largely sentimental movie-going public really want to hear Mark speaking to his mother at her graveside that, despite all he’s said publicly about an afterlife, he knows she’s really in the ground?

Religious matters aside, some of the gags are amusing, but others are only so-so. And though Anna’s growing realization that what’s below the skin is more important than surface perfection is an admirable if commonplace sentiment, we’ve seen this theme more satisfyingly dramatized elsewhere.

(Rated PG-13 by the MPAA for language including some sexual material and a drug reference.) Print this post
Posted by Harry Forbes at 8:19 AM