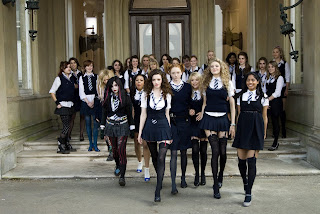 How, you might ask, could a remake of the 1954 British comedy classic, “The Belles of St. Trinian’s,” based on the characters created by artist Ronald Searle, possibly top that hilarious original with its lustrous cast including everyone’s favorite Scrooge, Alastair Sim (in a double role, one in drag), Joyce Grenfell, George Cole, Hermione Baddeley, and Beryl Reid?

Well, no surprise, it doesn’t. However, this updated and vulgarized version (a big hit in Britain, apparently) – chaotically directed by Oliver Parker and Barnaby Thompson – does feature a few game performances and, more or less, captures the original’s anarchic spirit.

The titular girl’s school is run by headmistress Camilla Fritton (Rupert Everett in Sims’ old role), with a curriculum unorthodox in the extreme. Black marketeering, betting, and shooting galleries with real ammo are the order of business. The older girls are sexually precocious beyond their years.

Along comes newcomer Annabelle (Talulah Riley), daughter of Carnaby Fritton (Everett again), Camilla’s shady brother. The poor girl is subjected to some horrific hazing, lead by “head girl” Kelly (Gemma Arterton). Annabelle’s videotaped in the shower, and must run naked back to her room, after which the video is posted on YouTube.

The institution comes under the humorless scrutiny of new Minister of Education Geoffrey Thwaites (Colin Firth whose image is lighted kidded throughout), who was once involved with Camilla. Bankruptcy and closure are threatened.

After a rambling first half, Piers Ashworth and Nick Moorcroft’s screenplay kicks into gear with a heist involving Vermeer’s “Girl with a Pearl Earring” from London’s National Gallery and a TV quiz show finale – shades of “Slumdog Millionaire ” -- all part of the girls’ efforts to save their school. The equivalent business in the original film involved an Arab sultan and a racehorse.

Russell Brand has some funny business as the girl’s shady black market dealer who fronts the girls’ shady wares.

(Rated PG-13 by the MPAA for thematic elements, drug and alcohol content, sexual material and language.) Print this post
Posted by Harry Forbes at 6:54 AM