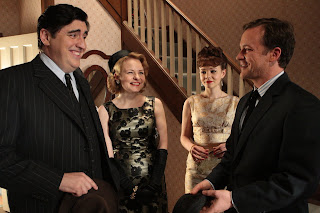 Jenny, the 16-year-old protagonist played by the excellent Carey Mulligan, gets an education all right, but not just the academic kind. This engrossing story, set in 1961 London, shows how a promising young teenager headed for Oxford University is thrown off track by the attentions of David, a charming older man, played by Peter Sarsgaard.

The screenplay, by Nick Hornby, was adapted from a memoir by journalist Lynn Barber about her early life

Jenny comes from a resolutely middle-class background, living with her protective parents Jack (Alfred Molina) and Marjorie (Cara Seymour). She’s a solid student, precociously dropping French phrases into her conversation, plays cello in the school orchestra, and it looks certain that she’ll live up to her father’s fretful aspirations.

When, returning from school cello in hand, waiting in the pouring rain for a bus that never comes, she accepts a lift home from David who expresses concern for her precious instrument.

In short order, he asks her to a concert. He wheedles permission from Jenny’s provincial parents with his disingenuous charm and subtle flattery of Jack overcoming the latter’s initially bigoted qualms over David’s Jewish heritage.

Outings to a jazz club, an art auction, Oxford (on the pretext of meeting C.S. Lewis, of all people) follow in quick succession. Jenny’s parents even allow her to go to Paris, confident their daughter will be chaperoned by David’s putative aunt. But there are small signs that all is not right, as when Jenny observes David and Danny involved in some shady real estate dealings.

Throughout all this, you’re kept wondering if David is as sweetly respectful of Jenny’s youth and inexperience, as he seems.

In any case, after all the time she spends with David, Jenny’s studies inevitably suffer, and she begins to believe that what she’s experiencing with David and his fast crowd is far more important – not to mention enjoyable – than higher learning.

She scorns the stern admonition of the school’s headmistress, played by Emma Thompson, and by the prim and bespectacled English teacher Miss Stubbs (Olivia Williams) who urges Jenny not to forego Oxford.

It is Mulligan’s performance that really holds the film together, believably mixing smarts with youthful naïveté while conveying underlying decency. She was 22 at the time of the shooting, but you wouldn’t guess it. Sarsgaard keeps his character appropriately enigmatic, though there’s never any doubt about the impropriety of the relationship. Mulligan and Sarsgaard shared the stage in “The Seagull” on Broadway last season, playing Nina and Trigorin respectively.

The performances are fine across the board, though, and Molina shines in a heartfelt speech to his daughter near the end of the film.

Besides guiding her cast to do such good work, Danish director Lone Scherfig creates an authentic sense of period.

(Rated PG-13 by the MPAA for mature thematic material involving sexual content, and for smoking.) Print this post
Posted by Harry Forbes at 4:29 AM