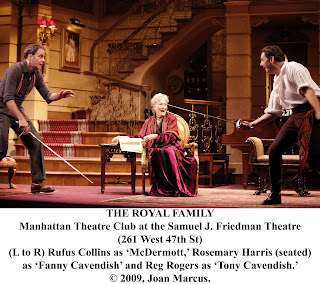 By the end of the first act with all its wildly frenetic hubbub and its stock maids and butlers dashing to and fro, I was beginning to think George S. Kaufman and Edna Ferber’s 1927 send-up of the Barrymore acting clan had had its day. Does anyone remember or care about the Barrymores today, apart from Drew, that is? Is the over-the-top passionate dedication to Theater relevant today? Are the farcical shenanigans of the fictional Cavendish household really all that funny?

I was inclined to think not after watching the glossy 2001 London revival featuring Judi Dench as matriarch Fanny Cavendish and great-on-paper cast including Harriet Walter, Julia MacKenzie, Toby Stephens, and newcomer Emily Blunt. That glossy production had its moments, but it was no great shakes. And neither, as I recall, were the American accents.

By the second act of the Manhattan Theatre Club’s new mounting, however, I was reminded that all it takes for this property to click is the right cast and a canny director.

Everyone fondly remembers the 1976 Ellis Rabb production with Rosemary Harris as middle generation Julia, the glamorous breadwinning star of the family. It’s easy enough to be reminded how good it was as the PBS broadcast of that production is still available on DVD.

Now Harris has graduated to Eva LeGallienne’s role of the aging (and ailing) Fanny, determined to hit the road once again. And she is, of course, superb. Jan Maxwell is now Julie, and she is masterful in every respect. When the action reaches fever pitch at the end of that second act and she is pushed beyond all endurance, Maxwell’s hysterical breakdown ending prostrate on the floor proves one of the all-time most enjoyably flamboyant displays of temper ever on the boards.

The show’s other comic standout is Reg Rogers as Julia’s hammy brother, Tony, modeled on John Barrymore. Having given up the stage for Hollywood, Tony, like Barrymore at the height of his silent movie fame, has fled back to New York, fleeing lawsuits for punching a director and breach of promise. He’s a whirlwind of swashbuckling affectation.

Tony Roberts was indisposed after a recent hospitalization but his part of manager Oscar Wolfe was expertly handled by Anthony Newfield. John Glover and Ana Gasteyer have the rather thankless roles of Fanny’s aging brother and talentless wife, but they fill the bill. Ditto Kelli Barrett as Gwen, Julia’s actress daughter, now poised to give up the stage for a blue-blooded non-actor (Freddy Arsenault). Julia herself finds herself in the same dilemma with the return of an old beau (Larry Pine) from South America.