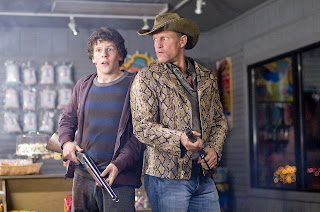 You might not think so from the title, but “Zombieland” is a funny and even touching action comedy about four disparate characters – survivors of a world where a virus has turned nearly everyone into flesh-eating zombies – who become reluctant comrades.

First, there’s nerdy, highly phobic college student Columbus (Jesse Eisenberg) who’s figured out a list of hard and fast rules for dealing with zombies (and these appear on screen for comic emphasis each time he states them). He joins forces with tough-talking road cowboy Tallahassee (Woody Harrelson) who, when he’s not gleefully bashing or shooting zombies, is engaged in the eternal search for one of the world’s last Twinkies.

For all their smarts, they soon get ripped off by a pair of con artist sisters: Wichita (Emma Stone) and 12-year-old Little Rock (Abigail Breslin).

But finally, forced to unite against the diseased mutants, they decide make their way from Garland, Texas to California’s Pacific Playland, a theme park said to be zombie-free.

Along the way, they take refuge in a deserted Los Angeles mansion – the home of actor Bill Murray, Tallahassee’s idol, and have an extended zombie-free, and for Columbus and Wichita, slightly romantic, interlude. And yes, Murray himself is on hand for an amusing cameo.

Eisenberg and Harrelson make an inspired comic duo. Harrelson’s wacky performance here provides an impressively striking contrast to his superb serious work in the soon-to-be-released “The Messenger.” Stone and Breslin make appealing counterparts, once they drop their tough personas.

Paul Wernick and Rhett Reese’s script is remarkably consistent for most of the film’s 87 minutes.

Though primarily a comedy, the squeamish should know the zombie sequences are played for real with enough flesh chomping and gore to satisfy fans of the genre. But the most extreme of those sequences comes early in the film just to establish that the threat to the central foursome is real. And Maher Ahmad’s production design – a cluttered and desolate landscape -- is as convincing as any post-apocalyptic flick. But, on the whole, it’s the pervasive threat, rather than on-screen presence, of the zombies that permeates the film.

Ruben Fleischer, in his feature film debut, balances the horror and comedy-romance with nicely, and the climactic Playland sequence is well executed.

Tallahassee tells Columbus to “enjoy the little things.” The same advice might be applied to this lightweight but thoroughly engaging film.

(Rated R by the MPAA for horror violence/gore and language.) Print this post
Posted by Harry Forbes at 6:09 AM