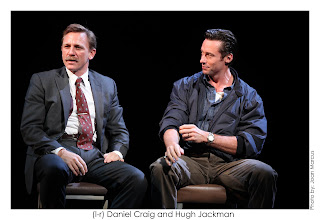 First things first. Mega moviestars Daniel Craig and Hugh Jackman – the former making his Broadway debut – are great as Chicago cops recounting the tumultuous events of several rain-soaked days. Both have solid theater backgrounds, so their assurance on the boards is not surprising, but their authentic Windy City accents and complete immersion in character are still mightily impressive.

When the curtain rises, the two men are seated and begin their respective narratives of those events face forward. But director John Crowley makes sure this is never static. Though the format is mostly alternating monologues, there’s plenty of interaction and more elaborate stage blocking when the script calls for it.

Craig is Joey, a lifelong Irish-American bachelor who’s had a drinking problem. Jackman is Denny, a resolute family Italian-American. They’ve been fast friends since childhood, but it’s clear that for all their camaraderie, Denny can be a bully, not only to Joey, and also to his wife and kids, much as he genuinely loves them. He’s also a racist, not above taking bribes, and he has a powder keg temper.

Denny tries to hook up his friend romantically with a prostitute (of all people) whom he invites to his house for dinner. (Joey’s an almost nightly guest at Denny’s table.) But reserved Joey doesn’t take the bait.

When Denny gallantly offers to drive the hooker home, he falls for her himself. Denny’s wife suspects the affair, and Joey offers consolation, leading to subliminal tension between the pals. Then, when Denny runs afoul of the prostitute’s pimp, matters take a violent turn, propelling the play to its gripping climax.

The narrative – allegedly based on a true event in Milwaukee -- is fairly gripping in itself, and Chicago playwright Keith Huff’s writing is strong and authentic to the milieu – but without strong leads, this would count for little. You have no trouble forgetting that you’re watching 007 and Wolverine, or that Jackman is such an adept song and dance man.

Some of what happens is reminiscent of TV procedural and other dramas about bad cops we've seen before, but Huff has a distinct voice, and his portrayal of a complex co-dependent relationship rings true. Above all, he’s constructed a solid theater piece.

Though the eyes focus on the actors and the two chairs against mostly a sea of darkness, Scott Pask’s set – a backdrop of Chicago tenements -- is strikingly illuminated at key moments.

Marquee luster aside, Craig and Jackman’s performances are likely to stand tall among the performances yet to come this theater season.