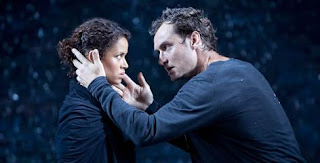 Jude Law gives a vibrant, passionate performance and speaks Shakespeare’s text with commendable clarity. This will come as no surprise to anyone who saw him in “Tis Pity She’s a Whore” at the Young Vic in London several years ago. He’s no slouch in classical roles.

On this occasion, though, it’s unfortunate that the production around him – via the Donmar Warehouse’s West End season (and a run at Elsinore in Denmark) -- seems so workmanlike, despite a solid British cast and a proven director.

For one thing, Law aside, the performances are a mixed bag. Kevin R. McNally as Claudius is rather lackluster until the prayer scene, his gruff affability breaking down with tears and ferocity. Ron Cook’s Polonius (and later the Gravedigger) was less a “foolish, prattling knave” in the former role, and more a tidy bureaucrat.

Gugu Mbatha-Raw’s Ophelia was well-spoken but bland. Peter Eyre was commanding as the ghost, but dull as the Player King. Geraldine James, replacing Penelope Wilton who played it in London, made an attractive Gertrude, but conveyed little inner conflict even after the closet scene.

There was decent work by Gwilym Lee as Laertes, Matt Ryan as Horatio, and Alan Turkington as Fortinbras. So, too, Rosencrantz and Guildenstern were well contrasted, beyond the bi-racial casting of John MacMillan and Harry Atwell respectively: Guildenstern more crafty, Rosencrantz more humane.

For his part, Law made the familiar soliloquies sound fresh, if sometimes studied, and he often externalized his words with grand gestures. “To be or not to be” began upstage as snow fell against the towering concrete backdrop wall from set and costume designer Christopher Oram. (Logical enough as there’s a snow reference in the following scene with Ophelia.)

Donmar Artistic Director Michael Gandridge (who replaced the originally announced Kenneth Branagh) did give us several nice touches: Hamlet pushing apart the chairs for his mother and Claudius before the performance by the players. Hamlet’s swearing of Horatio and Marcellus to silence after the ghost, the final scene.

On the other hand, the closet scene was disappointing blocked. Hamlet and Gertrude were first seen behind a diaphanous curtain, with Polonius in front to show his perspective. Once he was skewered by Hamlet, the curtain was pulled down. But the mother-son confrontation – on the floor instead of the non-existent bed – was less Freudian than merely athletic.

It’s always a pleasure to hear the text so clearly delivered by good English actors after much substandard American Shakespeare, but there have been more compelling productions within recent memory, including last year’s Public Theatre production (by Oscar Eustis), with more interesting performances, accents aside. Recent British “Hamlets” with Simon Russell Beale, Ralph Fiennes, and Stephan Dillane also get higher marks overall.

The play runs three and a half hours, and though it doesn't exactly drag, the production only catches fire when Law is on stage. But he’s reason enough to catch this more than respectable and always comprehensible “Hamlet.”