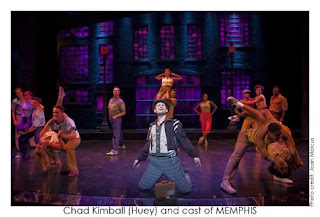 “Memphis” is one of the biggest surprises of the new season: a genuinely winning musical about an illiterate white 1950’s DJ, with a passion for black rhythm and blues, who integrates a radio, then TV, station in the titular Tennessee city, and his interracial love affair with the singer in a Beale Street club, over the objections of her brother and his mother.

Huey, the DJ, is outstandingly played by Chad Kimball, and the singer Felicia by Montego Glover. Her part is somewhat less complex, but she proves a fine match dramatically, has knockout looks, and a powerful voice. These roles should make stars of both of them.

We’ve seen these themes before. Picture an amalgam of “Hairspray,” “Dreamgirls,” and the film, “Cadillac Records.” The opening scene – a lot of sexy, gyrating at the club – bodes ill for originality, but once the narrative kicks in, one is completely absorbed.

Joe DiPietro and David Bryan (the book-writer and composer respectively, with both collaborating on lyrics) have fashioned a solid piece of musical theater that is both exhilarating and very moving, despite some dramatic flaws. (George W. George is credited with the original concept.)

As Huey’s popularity grows, he keeps his word to Felicia, her brother Delray (J. Bernard Calloway), and sidekick Gator (Derrick Baskin), and brings everyone up the ladder with him, including Bobby (James Monroe Iglehart), the rotund worker at the radio station who brings down the house in the second act with a number called, appropriately, “Big Love.”

Though Huey has an unfortunate naïve habit of public shows of affection with Felicia, which invariably lead to big trouble in the segregated town, the book consistently keeps their relationship on a positive level, even after they’ve been viciously attacked by angry bigots on the street one night.

Their union is only truly jeopardized when Felicia and then Huey are offered a chance at the big time in New York, and Huey resists. Felicia sensibly argues that they’ll be able to live openly there, and this will mean success on a national level for both of them. But Huey, unaccountably, cannot pull away from Memphis where, he continues to insist, they will both make their fortune.

Both Delray and Huey’s Mama (Cass Morgan) oppose the interracial romance, but never to the point of clichéd aggression or interference. And both make turnarounds by the end of the show, Cass showing how much she’s changed in her showstopping “Change Don’t Come Easy.”

With the look of a Christian Slater, and a laconic delivery and loose-limbed presence suggesting something of the late Peter Allen, Kimball’s not afraid to play up the less admirable aspects of his character. He drinks and becomes more arrogant as the story progresses, yet he nearly always makes his actions comprehensible, and we rarely stop rooting for him.

The supporting cast is pretty fabulous. The hard-working ensemble gets quite a workout, and impress on every level.

Those sensational performances by Kimball and Glover keep you believing even when the book strains credulity. Christopher Ashley, the artistic director of the La Jolla Playhouse is to be credited for making the evening so absorbing as drama as much as enjoyable from a musical standpoint.

On first hearing, the score by Bryan (Bon Jovi keyboardist) – under the leadership of music supervisor Christopher Jahnke -- sounds like a winner. Hard-driving rhythm and blues, soulful ballads, and pseudo-gospel numbers come one upon the other with hardly a clinker in the bunch.

The show’s de rigueur standing ovation was, in this case, well deserved.