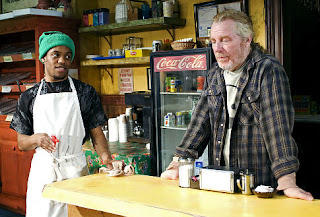 Shortly after his store is vandalized one morning, a deed he accepts with little more than a shrug, he hires Franco (Jon Michael Hill), a sassy 21-year-old black college dropout who, we learn later, needs the money to pay off sports gambling debts to a loan shark Luther (Robert Maffia) and his henchman Kevin (Cliff Chamberlain). They expect their money or else.

It speaks to Letts’ compassionate worldview that even Luther has a backstory that helps us see him as something more than a generic thug.

Franco quickly kicks some life into both the recalcitrant Arthur and the store, spewing forth in quick succession ideas about the inventory, the nutritional value of the doughnuts, how the place should look, and the possibility of holding poetry readings there. He doesn’t hesitate to criticize Arthur’s clothes, pony tail, and sales acumen, telling him he must learn to engage the customers.

He would almost seem to have the upper hand on Arthur, though the tables turn when Franco challenges him to name ten black poets, and Arthur, rather incredibly, rises to the challenge.

The shop is frequented by two friendly cops: partners James (James Vincent Meredith), who’s a closet Trekkie, and Randy (Kate Buddeke), a warm-hearted Irish-American from a family of cops, who’s sweet on Arthur, a divorced widower. In an early scene, she tentatively invites him to a hockey game, but he shyly evades the offer. There’s also the wisecracking alcoholic Lady (Jane Alderman) who comes by for her daily doughnut showing more sensitivity than her crusty exterior would indicate.

The play is anchored by McKean whose reserved manner – and inability to open up – is interspersed with monologues in which he reveals his inner feelings, his backstory including his Polish emigrant parents from whom he took over the shop.

Hill – fast-talking, confident, and thoroughly decent as Franco – lights up the stage at every turn. But all the performances are beautifully etched, even that of Michael Garvey as a nephew of Max who comes into the play late and barely speaks a word.

James Schuette’s set suggests an appropriately rundown establishment, and by the second act, he shows us how several of Franco’s suggestions have come to fruition. Ana Kuzmanic’s costumes delineate the characters perfectly.

Tina Landau is making her Broadway straight play directing debut and a distinguished one it is; she keeps the action taut and the borderline sentimentalism in check.

Though there is some violence and discord, “Superior Donuts” – which had its world premiere last summer at Steppenwolf Theatre Company -- is far removed from the acrimonious doings of Letts’ “August, Osage County,” and even further from his earlier plays, “Bug” and “Killer Joe.” There’s considerable humor here, and just as young Franco believes in possibilities, the play has a poignant but hopeful edge.